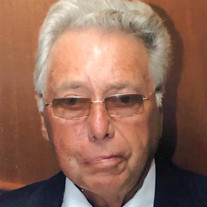 On Thursday, April 1, 2021, Alphonse Anthony Gentile, Sr., loving husband, father, grandfather, and great-grandfather, passed away at the age of 91 in Deerfield Beach, Florida. Alphonse was born on October 14, 1929 in New York City to Caroline (Muoio) and Anthony Gentile. He worked on his family's Poultry Farm as a child and young adult. He received a Bachelor of Science in Education and a Master's Degree in Guidance and Supervision from NYU. He taught Industrial Arts and served as an Assistant Principal and Grade Advisor at New Dorp and Port Richmond High Schools. Alphonse served stateside during the Korean war (1951-1953) as a Corporal in the United States Army. He was stationed at Fort Bragg before being assigned to the intelligence division on Governor's Island. He concluded his tenure with the Army in 1959. While serving on Governor's Island, Alphonse met his wife to be, Josephine (Lech) Gentile, on a blind date on Friday the 13th. The two married in 1955, and raised two sons, Alphonse, Jr. and Michael, and two daughters, Joanne and Donna Lynn. They were married for 59 years, until Josephine's passing in December 2014. Alphonse was a successful businessman. He opened and operated The Swiss Chalet in Great Kills, The Castaways Lounge in Princess Bay, The 4 o'clock Lounge on Forest Avenue, and the Ship Wheel Inn Restaurant and Lounge in Brielle, New Jersey. Back on Staten Island, he built and operated The Factory Lounge in Princess Bay as well as the Rock Palace on Van Pelt Street in Mariner's Harbor. Alphonse was a huge New York sports fan, and rooted for the Yankees and Giants. He held season tickets for the NY Giants since 1962, and never missed a home game in his prime. A highlight of his was attending the Giants' first Super Bowl game in Pasadena, California. A social butterfly, Al was a member of the Knights of Columbus, acting President of the Havol Men's Club for 13 years, a member of the Italian American Club in Staten Island and Pompano Beach, and played softball with the Deerfield Beach over 50 club. Alphonse had a passion for collecting things, and had amassed a sizable collection of model cars from the 1920s and 1930s, custom liquor bottles during his lounge days, and most notably, his collection of elephants that totals over 1,000 pieces. He recently began collecting actual cars from his youth, and proudly restored and refurbished a World War II Jeep and 1944 Ford tractor. Traveling was a favorite pastime of Al's. He and his wife, Jo, loved to vacation as often as possible. Their favorite travel destinations were the Caribbean, Mexico, the Dominican Republic, and Europe. They enjoyed over 100 cruises together, and instilled a love of travel in all their children (and grandchildren). They hosted several family vacations and cruises to the Caribbean, Mexico, and Punta Cana. Alphonse had a passion for cooking, loved socializing, huge family gatherings, and old world traditions. He could very often be found retelling an old story from his "younger years" to his grandchildren, who were always so eager to hear how different life was back then. He tinkered in his shop, and worked in his office, and music always rang throughout the house. Although he was a snowbird, he always found himself surrounded by family; he was loved and revered by all. He will always be remembered for his great advice, witty personality, and playful nature. Alphonse was preceded in death by his mother Caroline, his father Anthony, and his wife, Jo. He is survived by his children Joanne (Paul), Michael (Donna), Donna (Mark), and Alphonse , Jr., his grandchildren Donna Maria (Michael), Melissa, Alphonse, Ciara (Joseph), Anthony, Michael (Jennifer), JoAl, Ariana, Gianna, Jessica, and Alexander, and six great-grandchildren. A Mass of Christian Burial will be held at 10:15 a.m. on Tuesday, April 13, 2021 at Our Lady Star of the Sea Church located at 5411 Amboy Road Staten Island, New York 10312. Interment will follow at Ocean View Cemetery, Staten Island, NY. The family will receive friends from 1:00 p.m. to 5:00 p.m. on Sunday, April 11, 2021, and Monday, April 12, 2021, at John Vincent Scalia Home for Funerals, Inc., 28 Eltingville Blvd, Staten Island, New York. Please be mindful due to the current State mandate that a mask must be worn at all times in the funeral home and social distancing requirements must be followed during the services. Due to the current Pandemic a strict 50 person in room policy is in effect. Please adhere to this policy and allow others to pay their respects as well. Due to the current pandemic circumstances please note: We do not accept deliveries from outside vendors for bakery products, fruit baskets, and floral arrangements until further notice. Floral Arrangements can be purchased from our in house floral designers who work under the most stringent sanitary conditions which include temperature checks, mask wearing, distancing and protective clothing. You can call 718-948-2016 and place your order. We must protect the families we serve, our own families and staff who operate the funeral home.

The family of Alphonse A. Gentile created this Life Tributes page to make it easy to share your memories.

Send flowers to the Gentile family.