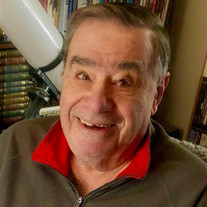 Andrew Paul Mele, 81 of Annadale, passed away on Saturday, August 8, 2020, at Staten Island University Hospital North. Born November 8, 1938 in Brooklyn New York; he was the loving son to his parents the late Paul and Lena Mele. Andrew was a proud graduate of Erasmus High School. Andy's passion and love of baseball started as a young boy and landed him in Florida where he was lucky enough to be scouted by the Washington Senators and played for their farm team. His love of baseball has been such an important part of his life. He was a proud Veteran and member of the Army Reserves. He was a member of the Selected Service from 1956 thru 1966. He met many friends along the way through the many Veteran Associations and groups he belonged to. He truly cherished their friendships. Andrew married the love of his life, Mildred, in 1960. They have two children Andrew & Christine. The Mele's moved to Staten Island in July of 1967 where he resided to this day. Andrew was predeceased by his wife Mildred in 2017. Andy's love and passion for baseball was something he carried with him his whole life. He belonged to many leagues over the years. He enjoyed playing baseball, softball and stickball. He was a proud team mate on the ''Old Boys of Summer.'' He made many friends over the years and considered them his family. He and his team mates even got the chance to play a game on the field at MCU Park in Coney Island. Last year, Andy was inducted into the Stickball Hall of Fame. After his retirement, Andrew decided to take a job working security for selected libraries in Brooklyn. While working, he became interested in doing research and reading; especially on his favorite baseball team, The Brooklyn Dodgers. All of the information that he found led him to become a published author. Over the last twelve years, Andrew has published numerous books about the Brooklyn Dodgers. He was the author of ''Italian Staten Island'' and his latest book was ''The Italian Squad''. A true story based upon his uncle and other police officers who formed a group of Italian detectives to deal exclusively with the extortion crimes and the criminal underworld of Italian society in New York which had become known in the American press as ''The Black Hand Society.'' He was so proud of his work and even got the opportunity to have numerous book talks and signings in New York and New Jersey. The last signing was at Barnes and Noble before the start of the Coronavirus. Andrew was a columnist for the Staten Island Advance and wrote a monthly article called ''The Staten Island Memories Column.'' And for the last five years he taught the course ''Baseball Memories'' in the Options Program for Seniors at The College of Staten Island. Andrew was a family man who cherished spending time together. He especially looked forward to family vacations in Cape May and celebrating the holidays, his favorite was Christmas Eve. There was a special place in his heart for his only granddaughter, Alexandra. They spent numerous hours discussing their favorite topics of Space and baseball. He was her biggest fan. Andrew is survived by his daughter Christine Mele-Love, son Andrew Mele (Michelle), sister MaryLee Kearney and granddaughter Alexandra. A Mass of Christian Burial will be held at 10:30 AM on Tuesday at St Thomas the Apostle Church. Interment to follow in Ocean View Cemetery, Staten Island, NY. The family will receive friends from 5:00-9:00 PM on Monday, August 10, 2020, at John Vincent Scalia Home for Funerals, Inc., 28 Eltingville Blvd, Staten Island, New York. Please be mindful due to the current state mandate that a mask must be worn at all times in the funeral home and social distancing requirements must be followed during the services. Due to the current Pandemic a strict 40-50 person in room policy is in effect, please adhere to this policy and allow others to pay their respects as well. Online condolences may be made to the family at www.scaliahome.com

Andrew Paul Mele, 81 of Annadale, passed away on Saturday, August 8, 2020, at Staten Island University Hospital North. Born November 8, 1938 in Brooklyn New York; he was the loving son to his parents the late Paul and Lena Mele. Andrew was... View Obituary & Service Information

The family of Andrew Mele created this Life Tributes page to make it easy to share your memories.

Andrew Paul Mele, 81 of Annadale, passed away on Saturday, August...

Send flowers to the Mele family.