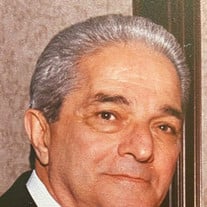 Anthony John Castellano 1941-2021 It is with great sadness that the family of Anthony J. Castellano, 79, announce his passing on January 18, 2021 at his home in Manchester, NJ. Tony was born in Brooklyn on September 28, 1941 to Tom and Anna (Lococo) Castellano, the youngest of 5 children. After graduating from Fordham University of Law, he became a member of the Richmond County Bar Association and led a successful career in real estate law. He was a hardworking man, a loving father and grandfather, and a devout Catholic. He enjoyed simple pleasures in life such as spending time with family, smoking cigars, and watching Law & Order, but it was his children and grandchildren that brought him the most joy. Tony was preceded in death by his parents, Tom and Anna, his brother Major General Vito Castellano, his brother in laws Joseph Vurchio and Edward Russo and his sister in laws Dottie Castellano and Marie Castellano. He is survived by his children Lisa (Neal) Britton, Annmarie (Alec) Lehrer, Jennifer (Joe) Mariconda, Marc (Maryann) Castellano, Stephanie (Chris) Cardillo, and Michael Castellano; his grandchildren Megan Filoramo, Hannah Filoramo, Ava Castellano, Mia Castellano, Christian Mariconda, Julia Mariconda, Lily Mariconda, Addison Castellano, Aiden Lehrer, Emma Lehrer, and Olivia Cardillo; his siblings Margaret Russo, Ann Vurchio, Sebastian Castellano and his sister in law Mary Castellano; and numerous nieces and nephews. Visitation will be Friday, January 22 from 5-9 pm at John Vincent Scalia Funeral home. A Mass of Christian Burial is scheduled for Saturday, January 23 at 10:00am at Our Lady Help of Christians in Tottenville. Donations in lieu of flowers are welcome to the Michael J. Fox Foundation for Parkinson's Research (www.michaeljfox.org)

Anthony John Castellano 1941-2021 It is with great sadness that the family of Anthony J. Castellano, 79, announce his passing on January 18, 2021 at his home in Manchester, NJ. Tony was born in Brooklyn on September 28, 1941 to Tom and Anna... View Obituary & Service Information

The family of Anthony John Castellano created this Life Tributes page to make it easy to share your memories.

It is with great sadness that...

Send flowers to the Castellano family.