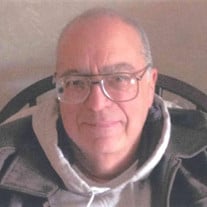 Dr. Anthony E. Curcio, 81, passed away on Friday, October 22, 2021at Staten Island University Hospital North. Born Friday, August 2, 1940 in Brooklyn, New York, he was the son of the late Emil Curcio and Ethel Mohr Curcio. Anthony was a retired dentist who graduated from the University of Maryland Dental School in 1965. His Dad, Emil, also graduated from the same school in 1935. After Anthony's graduation, he enlisted in the United States Navy. His first tour of duty was the Antarctic, followed by a tour of duty in Vietnam. While in the Army, he volunteered for Desert Storm. Anthony had a strong love of Country, which was evidenced by his military service in the Army, Air Force and Coast Guard. Anthony spent approximately 38 years in the military, achieving the rank of Lieutenant Colonel. After he proudly served in the Navy, Anthony joined his father, Dr. Emil Curcio's private dental practice. While serving in the Army for Desert Storm he was conflicted about leaving his patients and treating casualties, but he knew he was leaving his private patients in good hands with his father, Emil and Brother, Ralph. Anthony met the love of his life, Mary Ann in 1968 and they recently celebrated their 52nd wedding anniversary. He was extremely proud of his only child, Jean, and would do anything for her. Anthony loved gardening and landscape design. He was proud of the Koi pond that he designed and built in his backyard. His greatest joy was going to his grandson Max's basketball games, practices and track meets. He never missed a single basketball game or track meet. He was a stubborn, generous and protective man and absolutely adored his 3 grandchildren, Max, the oldest, and the twins, Michael and Mary-Jean. Anthony enjoyed the simple things in life - fine wine and good food. He loved nature shows, history shows and positively loved the nightly news. And, as many can attest to, he had a unique sense of humor. Anthony was loved by many and will be missed greatly. He was the devoted husband of 52 years to Mary Ann. Loving father to Jean Dodd. Fond father-in-law to John Dodd. Cherished grandfather to Max, Michael, and Mary-Jean. The family will receive friends from 2:00 - 4:00 p.m. and 7:00 - 9:00 p.m. on Tuesday, October 26, 2021, at the John Vincent Scalia Home for Funerals, Inc., 28 Eltingville Blvd, Staten Island, New York. A Mass of Christian Burial will be celebrated at 11:00 a.m. on Wednesday, October 27, 2021 at Holy Child Church, located at 4747 Amboy Road, Staten Island, NY. Cremation will be private.

The family of Dr. Anthony E. Curcio created this Life Tributes page to make it easy to share your memories.

Send flowers to the Curcio family.