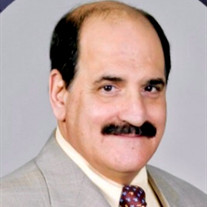 Anthony John Gelormino of Staten Island passed away on December 2, 2020. Born on April 16, 1943 in Brooklyn, NY to Louis and Rose Gelormino. Anthony was a giant of a man who spent most of his adult life helping people in their fight against drug addiction. Coming up himself through Daytop Village in the early 1970's, Anthony went on to become a Director and Vice President in the Program, as well as a very dedicated liaison to the Family Association. This passion of helping others to help themselves' led Anthony to also become the Executive Director of Progetto Uomo in Rome Italy during the 1980's and eventually the President of the World Federation of Therapeutic Communities. Anthony retired as Vice President of Supportive Programs for Samaritan-Daytop Village in 2014, though he continued to work with individuals on a volunteer basis. International acclaim and recognition meant nothing to Anthony compared to sitting down and talking with any individual in need. Anyone who knew him, even for five minutes, knows that. Anthony had a wanderlust. He was smart and adventurous. He loved traveling the world, from the deserts of North Africa to the jungles of Southeast Asia. From the eternal city of Rome, his 2nd home, to Carroll Street in Brooklyn, the place of his birth, and to where he would always return. Wherever he went, you could always find him with the local people sharing their food, culture and, of course, himself. The ''Visiting Prince'' was loved and will be deeply missed. He is survived by his children John and his wife Mary, Louis and his wife Gina and Anthony, his brothers Gene and his wife Phyllis, Louis II and his wife Elaine, James and his partner Carolann Salomone. His devoted sister mary Gelormino. His loving partner Linda Jimenez. His grandchildren Kaylan Alexander and her husband Todd, Gianni, Jenna and Emily Gelormino. His great grandchidren Stephen and Spencer. His former spouse Marie and many loving nieces, nephews and cousins. Due to the Covid 19 Pandemeic, funeral services were private. A celebration of Anthony's life and a Memorial Mass will be held on Monday, December 21st, 2020 at 11 a.m. at St. Francis Xavie Church located at 225 6th Ave, Brooklyn, NY 11215. Funeral arrangements were entrusted to the John Vincent Scalia Home For Funerals Inc.

Anthony John Gelormino of Staten Island passed away on December 2, 2020. Born on April 16, 1943 in Brooklyn, NY to Louis and Rose Gelormino. Anthony was a giant of a man who spent most of his adult life helping people in their fight against... View Obituary & Service Information

The family of Anthony Gelormino created this Life Tributes page to make it easy to share your memories.

Anthony John Gelormino of Staten Island passed away on December...

Send flowers to the Gelormino family.