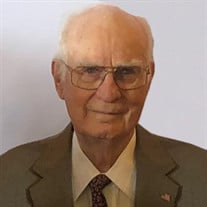 Arthur F. Olsen, Jr. of Grant City passed away at home on Monday May 9, 2022 surrounded by his loving family. Born in Brooklyn to the late Arthur and Irene, Arthur was a graduate of Alexander Hamilton Vocational School and then went on to obtain his Bachelor's Degree in Electrical Engineering from the Polytechnic Institute of Brooklyn. Arthur proudly served his Country in the United States Army from 1948 through 1949, then served as a reservist for 6 years obtaining the rank of Sergeant. He worked for Consolidated Edison as a Construction Project Manager from 1973 until his retirement in 1997. Prior to working for Con Ed, he began his career after leaving the service at the Anaconda Electrical Design Company where he stayed for several years before moving on to Parsons Jordan Stern for a short period of time. He then took a position with Franzblau & Fitzsimmons, where he was instrumental in the electrical design of Co Op City in the Bronx. He then went to work for Lumas/Combustion Engineering where he was project manager for 8 years. His government and industrial construction projects took him all over the world as he travelled to Canada, Chile, Persia, Saudi Arabia, and throughout most of Europe. When at home, Arthur enjoyed the simple pleasures that life offered, and spending quality time with his family was first and foremost, with his five grandchildren always being the center of his attention. He was a Brooklyn Dodger fan, and when they left New York for the West Coast he became a true die hard fan of the NY Mets. He also enjoyed playing an occasional round of golf with his buddies. He was predeceased by his beloved wife of 62 years Elsie. He is survived by his devoted sons Thomas and his wife Angela, Richard and his wife Anna Marie. He will be fondly remembered by his 5 grandchildren: Thomas Joseph (TJ), Andrew, Elizabeth, Mark and Erika, each of whom held a special place in his heart. A gathering of family and friends will take place on Thursday, May 12 from 2-5 and 7-9 p.m. at the John Vincent Scalia Home for Funerals, 28 Eltingville Blvd, Staten Island. A Mass of Christian Burial will be offered at 10:30 a.m. Friday, May 13 at St. Christophers Church, 130 Midland Avenue, Staten Island. Interment, with Military Honors, will follow in Moravian Cemetery. In lieu of flowers, the family is requesting that contributions be made Arthur's memory to the JCC Olsen Family Wellness Center Fund in support of the Lucille and Jay Chazanoff Sunrise Day Camp, the world’s first full-summer day camp for children with cancer and their siblings. https://sijcc.networkforgood.com/projects/157235-olsen-family-wellness-center-fund-for-sunrise-day-camp

Arthur F. Olsen, Jr. of Grant City passed away at home on Monday May 9, 2022 surrounded by his loving family. Born in Brooklyn to the late Arthur and Irene, Arthur was a graduate of Alexander Hamilton Vocational School and then went on to obtain... View Obituary & Service Information

The family of Arthur F. Olsen, Jr. created this Life Tributes page to make it easy to share your memories.

Arthur F. Olsen, Jr. of Grant City passed away at home on Monday...

Send flowers to the Olsen family.