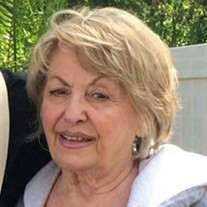 Barbara Calabrese, 82 of Eltingville, passed away on Saturday, January 8, 2022, at Staten Island University Hospital South. Born Wednesday, November 15, 1939 in Brooklyn, New York she was the loving daughter of Marie Sansevero , she was born and raised in Brooklyn, before moving to Eltingville where she has lived for the last 44 years. She was the beloved wife of the late Anthony Calabrese. Barbara and Anthony were married for 38 years when he passed away in 2004. They were known as ''Bunny and Rab'' and are now together again. Barbara worked as a secretary for many years for the United Artists entertainment group. She then went on to work at Golden's Deli and became the manager there until their closing. Barbara loved shopping and visiting Atlantic City. She could be found in her garden during the Spring and Summer months and also enjoyed playing online word games, crossword puzzles and word searches. She had a nickname for those near and dear, and when called upon, they truly cherished the sentiment. Barbara loved the holidays and having everyone together. She was fond of traditions and passing them along. She loved her family and adored her grandchildren and great grandchildren. They were truly the pride and joy of her life. Barbara is survived by her children Joseph, Vicky, Tony, Valli Silverstein, Dana Bracco, Barbilyn Crocitto and Cory. Loving mother in law of Allan Silverstein, Philip Bracco, Christopher Crocitto, Patricia Calabrese and Maria Calabrese; her 17 grandchildren Deanna, Felicia, Dominique, Philip, Justin, Anthony, Connor, Christopher, Ally, Taylor, Ryan, Collin, Tyler, Gianna, Antonio, Angelo and Charley and her two great grandchildren Joseph and Dominick. A Mass of Christian Burial will be offered at 11:00 AM on Thursday at St Clare Church located at 110 Nelson Ave Staten Island, New York 10308. Interment will follow in Resurrection Cemetery, Staten Island, NY. The family will receive friends from 2:00 PM to 5:00 PM and 7:00 PM to 9:00 PM on Wednesday, January 12, 2022, at John Vincent Scalia Home for Funerals, Inc., 28 Eltingville Blvd, Staten Island, New York.

The family of Barbara Calabrese created this Life Tributes page to make it easy to share your memories.

Barbara Calabrese, 82 of Eltingville, passed away on Saturday,...

Send flowers to the Calabrese family.