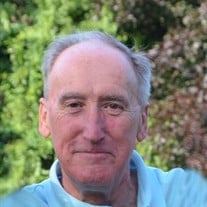 Bernard J. Baldinger, 82, beloved father, grandfather, brother, uncle and friend passed away at home on October 12, 2021, after a two-year battle with cancer. Born on May 2, 1939, he was the son of the late Edward Baldinger and Mary Baldinger (nee Burke) and brother to the late Mary Molinelli. A lifelong Staten Islander, Bernie attended St. Paul's Elementary School and Curtis High School and was a graduate of the College of Staten Island. He served in the United States Coast Guard before joining the New York City Fire Department, a career he loved and cherished for over twenty-five years. Upon his retirement he became a Fire Safety Inspector at the World Trade Center where he worked until the 9/11 terror attacks. Forever impacted by those events, Bernie believed in living every day to its fullest and in finding joy in each moment. Whether it was playing golf or the horses or spending time with his family, Bernie never missed an opportunity to make those around him smile and laugh. Predeceased by his wife Peggy, Bernie leaves behind his children Sheila Coyne and her husband Matt, Maggie Baldinger and her wife Kat; his grandchildren Lucy, Lizzie, Caleb, and Abby; his brothers Edward Baldinger (Joan) and Mark Baldinger, and many nieces, nephews, cousins, and in-laws. The family will receive friends from 4:00 - 8:00 p.m. on Friday, October 15, 2021, at the John Vincent Scalia Home for Funerals, Inc., 28 Eltingville Blvd, Staten Island, New York. A Mass of Christian Burial will be celebrated at 9:45 a.m. on Saturday at St. Clare Church located at 110 Nelson Ave Staten Island, New York 10308.

Bernard J. Baldinger, 82, beloved father, grandfather, brother, uncle and friend passed away at home on October 12, 2021, after a two-year battle with cancer. Born on May 2, 1939, he was the son of the late Edward Baldinger and Mary Baldinger... View Obituary & Service Information

The family of Bernard J. Baldinger created this Life Tributes page to make it easy to share your memories.

Send flowers to the Baldinger family.