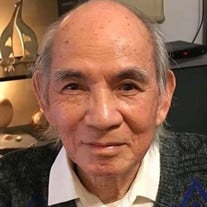 On Monday, November 30, 2020, Brian Ren Ching Pan, loving husband and father, passed away at the age of 83 due to a heart attack. He is survived by his wife, Mary Mei Lien Pan (née Tsao), his son Yen Morris Pan, his daughter in law Kathrin Pan (née Schmidt), and his grandson Nicholas Pan. Brian was born on April 17, 1937 in Puli, Taiwan. He earned a B.A. degree in 1966 at the Chinese Culture University and was a Mandarin-Chinese teacher in Taiwan. In 1969 he married Mary and soon afterwards, the couple welcomed their only son, Morris, into the world. As his passion had always been arts, he decided to pursue an art degree at the Philadelphia College of Art in 1971, for which he moved to the United States of America. Two years later his wife and son joined him there and Brian eventually opened up a Chinese restaurant in Philadelphia. In 1975 he moved the family to New York City where he owned a restaurant in the Lower East Side until 1988. Brian filled his days admiring the beauty of parks and gardens. He loved to go for long walks, writing calligraphy, and creating art. Painting has always been very important to him. Watching his grandson Nicholas grow up filled his heart with joy. Also, he was very dedicated to his Christian beliefs and went to church every Sunday for as long as he was able to. He devoted much of his time and energy as a caregiver to his wife who fell seriously ill. He was known to be always friendly with a bright smile. Everyone that came across his path, no matter how brief, commented that he was a very kind and nice man. He was an impressive artist that decorated his apartment with his own calligraphy and works of art. He will be greatly missed by everyone that knew him. At his request he has been cremated and a memorial service will be conducted online. Details will be sent to friends and family members.

On Monday, November 30, 2020, Brian Ren Ching Pan, loving husband and father, passed away at the age of 83 due to a heart attack. He is survived by his wife, Mary Mei Lien Pan (née Tsao), his son Yen Morris Pan, his daughter in law Kathrin... View Obituary & Service Information

The family of Brian Pan created this Life Tributes page to make it easy to share your memories.

Send flowers to the Pan family.