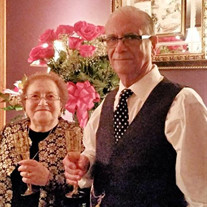 Anna grew up during WWII, times were difficult and her parents had to work hard in order to provide for 10 children. She went to sewing school and learned to cretae outfits from pattern to finished product. She became a teacher to many others. Calogero (Lillo) Dattolo, 84, resident of Middletown NJ was the beloved husband of the late Anna Dattolo. He passed away on January 10th 2022. Born in Alcamo, Sicily on March 21st 1937, he was the youngest and only boy of 4 children of the late Antonio & Mattia Dattolo. Lillo also grew up during WWII, he went to sewing school and learned to sew, design, and create patterns to finished product. As a young boy, he had a dream to come to America, and finally realized that dream at the age of 26. At 9 years old, Lillo met 15-year-old Anna and knew she would be the girl he would marry. As he was just a boy, she had no interest but they became friends. Anna was engaged to someone else for 5 years, but Lillo kept his dream alive and pursued her for 17 years until she became convinced to marry him. They were engaged in 1964. That same year, he came to America to establish himself. After saving enough money, he returned to Sicily to marry Anna on January 10th 1966, they came to America by ship. On May 7th 1967, they had their one and only daughter, Josephine Dattolo Monteforte. Lillo pursued a career in the men's garment industry, while Anna was a stay-at-home Mom. They purchased their first home in Brooklyn, NY in 1972. In 1982, he changed careers and began working in the ladies' garment industry, making outfits for Liza Minelli and First Lady, Barbara Bush. He finished his career working for Donna Karan. In 1982, Anna began her career in the bridal industry and loved designing and creating hand sewn bead work for bridal gowns. Lillo and Anna had an amazing bond, after she passed away, he was not able to continue living without her, passing away 8 days later, on their 56th wedding anniversary. Lillo and Anna are survived by their daughter Josephine and her husband, David Monteforte. There will be a ceremony and burial at 12:00 p.m. on Saturday January 29th 2022 at Resurrection Cemetery, 361 Sharrott Ave., Staten Island NY in the mausoleum chapel.

Anna grew up during WWII, times were difficult and her parents had to work hard in order to provide for 10 children. She went to sewing school and learned to cretae outfits from pattern to finished product. She became a teacher to many others. Calogero... View Obituary & Service Information

The family of Calogero & Anna Dattolo created this Life Tributes page to make it easy to share your memories.

Anna grew up during WWII, times were difficult and her parents...

Send flowers to the Dattolo family.