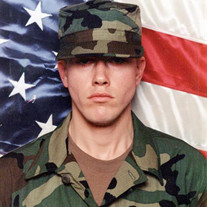 Charles J. Edkins Jr., 40, lifetime Staten Islander and resident of Annadale, passed away on Friday, November 5, 2021. Born Wednesday, December 10, 1980 in Staten Island, New York, he was the beloved son of Charles and Mary Ann (nee Armstrong) Edkins. Charles was a graduate of Our Lady Star of the Sea School. He then attended and graduated from Monsignor Farrell High School. In Farrell, Charles ran track and field for four years. Following High School, he then went onto to Villanova University. Charles was a proud Veteran of the United States Army. While serving he was trained as a combat medic. He was the recipient of Army Achievement Medal, the National Defense Service Medal, the Global War on Terrorism Service Medal and the Army Service Ribbon. He will be remembered for his great sense of humor and his crazy, infectious laugh. Charles, our son, suffered with drug addiction and attended many rehabs. The addiction did not define him, he was so much more. He loved and enjoyed life and wanted to live. Charles was pre-deceased by his sister Mariana in 2006. He is survived by his parents, Mary Ann and Charles J. Sr., his sister Dolores Edkins, His uncles James Edkins, James Armstrong, Edward Armstrong and his Aunts Mary Rose Weyershausen and Eileen Ferrari along with many cousins and friends who supported him throughout his life. A Mass of Christian Burial will be held at 11:00 AM on Wednesday at Holy Child Church located at 4747 Amboy Road Staten Island, New York 10312. He will be laid to rest with his sister at Resurrection Cemetery. The family will receive friends from 7- 9 p.m. on Monday and 2-4 & 7-9 p.m. on Tuesday at John Vincent Scalia Home for Funerals, Inc., 28 Eltingville Blvd, Staten Island, New York. Online condolences may be made to the family at www.scaliahome.com

The family of Charles J. Edkins, Jr. created this Life Tributes page to make it easy to share your memories.

Send flowers to the Edkins family.