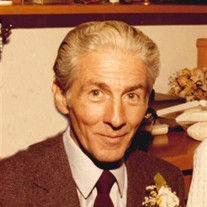 Daniel J. Carroll, 93, passed away on Monday, September 20, 2021, at Richmond University Medical Center. Daniel Carroll, fondly known by those closest to him as Pop, had more stories and adventures then many of us. He lived, and by lived, he lived in every sense of the word. If he wanted to go to Florida , Atlantic City, New Mexico, California or Las Vegas, he would get in his car and go. Every time his children and grandchildren would leave his house he would walk them to their cars and start dancing on the sidewalk. This became a tradition. All of his grandchildren would look forward to it and smile, roll the windows down and cheer him on. That was pop. He had the dance moves. He was always in on the action. He was the life of the party and never passed up a good time. A regular at Lee's Tavern for decades, he had his own stool at the bar, and if you wanted to see Pop you knew where to find him. Pop loved golf and played some in his younger years at LaTourette Golf Course. He loved shooting pool and watching the horse races, never missing a running of the Kentucky Derby. Pop liked watching sports but he loved to gamble on them more. He took great pride in working with his grandsons and granddaughter in Florida at the Boys Farmers Market. He enjoyed being in on the day-to-day action of the store and getting to spend time with his family during the process was a joy for him. He also treasured his time spent in Florida, the warm weather, his family and the beach. One thing that is certain was whenever it came down to it Pop would step up. Pop would always make sacrifices and go above and beyond for his family. Regardless of the circumstances he had your back. Of course if you were wrong he would let you know. But he had your back. Pop did everything he could for his family and if you knew Pop he considered you family. He will be truly missed but lives on through his daughters, son and his many grandchildren and great grandchildren. We love you always. Until we meet again. He was the beloved husband to the late Joan, who passed away in 2017. Loving father to Nancy Picciolo, Daniel Carroll, Joanne Carroll and the late Linda Palermo. Fond father-in-law to to John Picciolo. Devoted grandfather to Joseph, Michael, Richard, John, Frank, Andrea, John James, Jason, Jillian, Robert, Alicia, Jessica, Xavier, Jay, Meghan, Kelly and Matthew. Daniel is also survived by his many loving great grandchildren.. The family will receive friends from 2-5 p.m. and 7-9 p.m. on Friday, September 24, 2021, at the John Vincent Scalia Home For Funerals, Inc., 28 Eltingville Blvd. (at Eltingville Station), Staten Island, New York. A Mass of Christian Burial will be offered at 11:00 a.m. on Saturday, September 25, 2021 at St. Clare Church located at 110 Nelson Ave Staten Island, New York 10308. Cremation will be private.

Daniel J. Carroll, 93, passed away on Monday, September 20, 2021, at Richmond University Medical Center. Daniel Carroll, fondly known by those closest to him as Pop, had more stories and adventures then many of us. He lived, and by lived, he... View Obituary & Service Information

The family of Daniel J. Carroll created this Life Tributes page to make it easy to share your memories.

Send flowers to the Carroll family.