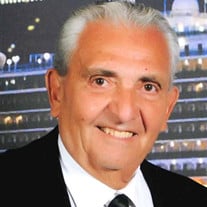 Edward ''Eddie'' Lotito, 85 of Great Kills passed away on Thursday, October 7, 2021, at Staten Island University Hospital South in Staten Island, New York. Born Thursday, April 30, 1936 in Brooklyn, New York, he was the son of the late Alphonso Lotito and the late Columbia Caporale Lotito. Edward, a US Army Veteran and retired Sanitation Worker for DSNY, was first and foremost a devoted family man. Edward in his downtime, was a lover of Crossword puzzles. He was eager to go outside and play with his nieces and nephews and the neighborhood kids, keeping up with what they were doing. Following a long career, Eddies favorite nights of the week were garbage pick up nigh, making sure to go out and greet the Sanitation workers who were on his route at the time and reminiscing about his own time on the job, as well as making sure his garbage was out in proper form for his brothers in service. He was the devoted husband of Bridgett Lotito. Loving father of Denise George. Dearest father in law of the late Tommy George. Second grandfather to many nieces and nephews. Cherished nephew of Florence Caporale. Devoted brother, uncle and friend to all who knew him.. A Mass of Christian Burial will be offered at 11:00 AM on Tuesday at St Clare Church located at 110 Nelson Ave Staten Island, New York 10308. Private Cremation to follow. The family will receive friends from 4:00 PM to 9:00 PM on Monday, October 11, 2021, at John Vincent Scalia Home for Funerals, Inc.., 28 Eltingville Blvd, Staten Island, New York.

The family of Edward Lotito created this Life Tributes page to make it easy to share your memories.

Send flowers to the Lotito family.