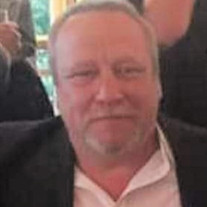 Erik Moser, 59, of Annadale died suddenly in his home on December 31, 2021. Erik was born in Brooklyn, but Staten Island became his home when he was only an infant. Erik was the son of the late Fred and Janet Moser (Thue). He grew up in Annadale and graduated from Tottenville High School, after which he went on to become a master carpenter and tradesman. He took great pride in his Norwegian heritage, always sure to make sure all he met knew that he was a true Viking. Erik had a passion for history, carpentry and anything outdoors, from fishing to archery, to hikes through Wolfe's Pond Park. He was a kind and gentle soul, always ready to help anyone in need. He was everyone's first call; whether it was for something to be fixed, to vent about life, or just for a quick laugh. He was also there for animals that needed rescue and love. We were all blessed that he was there for us. Knowing Erik truly was a gift that we are all grateful for and we will miss him more than words can convey. Erik's immense love for his friends and family was apparent to everyone who knew him. He never passed up an opportunity to brag to his friends about his neices, children or grandchildren. He also always made sure to tell his children and grandchildren funny stories from his childhood or about the history of Staten Island, especially Annadale. As a lifelong member of Messiah Lutheran Church and resident of Annadale, Erik made early childhood friends who stood by his side throughout his days and became a part of his family. The Church had become such a big part of Erik's adult life and he was proud to work as the church Sexton for the past decade. His love and dedication to his parish over the years is something to be admired. Erik is survived by his sister Linda and her husband David Hall, along with their two daughters, Brittany Klancher (Erik's goddaughter), and Rachel Hall. Erik was also the proud father of Michael, Matthew, Danielle, Kassandra, Dylan and Jonathan. The title that Erik wore proudest, was that of Pop, as he was known to his five grandchildren, Jayden, Damian, Aneesiya, Amaya and Kamaree. A Funeral service will be at 11:00 AM on Thursday at Messiah Lutheran Church located at 205 Jefferson Blvd Staten Island, New York 10312. Arrangements inlcude private cremation. The family will receive friends from 6:00 PM to 9:00 PM on Wednesday, January 5, 2022, at John Vincent Scalia Home for Funerals, Inc., 28 Eltingville Blvd, Staten Island, New York. Online condolences may be made to the family at www.scaliahome.com

Erik Moser, 59, of Annadale died suddenly in his home on December 31, 2021. Erik was born in Brooklyn, but Staten Island became his home when he was only an infant. Erik was the son of the late Fred and Janet Moser (Thue). He grew up in Annadale... View Obituary & Service Information

The family of Erik C. Moser created this Life Tributes page to make it easy to share your memories.

Erik Moser, 59, of Annadale died suddenly in his home on December...

Send flowers to the Moser family.