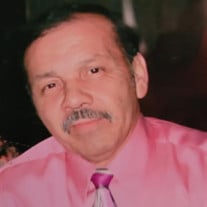 On September 2nd, 2021, Francisco Gonzalez loving husband, brother, father, grandfather and uncle passed away at the age of 73. He was born December 3rd, 1947 in Rincon, Puerto Rico and he relocated to the United States in 1957. He made his career working with the MTA as a bus driver retiring at 62. He was a man of many skills that enjoyed helping others, playing dominos, music, gardening, cooking and being a jokester. His favorite past time was visiting and spending time with family. He was preceded in death by his father Pedro Gonzalez, his mother Rosa Gonzalez (nee Mendez-Carrero), stepmother Juanita Gonzalez (nee Mendez), 2 brothers Bienvenido and Nelson, and his sister Virginia. He is survived by his brother Nieves, 3 sisters Aida Candelaria (married to Miguel), Lydia Maiz and Milagros Miller, married to Stephen. With Rosanna Farina he had a daughter Maria Gonzalez. With his wife Edith Gonzalez (nee Lorenzo) he had 3 sons; Francisco Jr., married to Jennifer (nee King), Rene, married to Nella (nee Liuzzi), and Anthony. With his second wife Blanca Maldonado he has 2 stepsons; Juan Marcial, married to Luz (nee Valentin), and Billy Marcial, married to Celia (nee Terry). He also has 10 grandsons, 5 granddaughters, 1 great grandson, 1 great granddaughter, several nephews, nieces, great nephews and great nieces. His family's fondest memory is how friendly he was and how he was loved by all who met him. A Mass of Christian Burial will be held at 10:00 AM on Friday at Holy Child Church located at 4747 Amboy Road Staten Island, New York 10312. Interment will follow in Ocean View Cemetery, Staten Island, NY. The family will receive friends from 2:00 PM to 5:00 PM and 7:00 PM to 9:00 PM on Thursday, September 9, 2021, at John Vincent Scalia Home for Funerals, Inc., 28 Eltingville Blvd, Staten Island, New York.

On September 2nd, 2021, Francisco Gonzalez loving husband, brother, father, grandfather and uncle passed away at the age of 73. He was born December 3rd, 1947 in Rincon, Puerto Rico and he relocated to the United States in 1957. He made... View Obituary & Service Information

The family of Francisco Gonzalez, Sr. created this Life Tributes page to make it easy to share your memories.

Send flowers to the Gonzalez family.