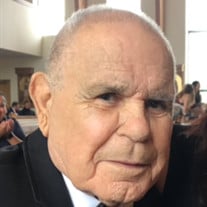 Frank ''Cheech'' Fontanarosa, 91 of Eiltingville, passed away on Sunday, September 26, 2021, at Richmond University Medical Center in Staten Island, New York. Born and raised in South Brooklyn, he was the son of the late Vincent and Carmella Fontanarosa. Frank was the beloved husband to his late wife Louise. They married in 1954 and had 5 children together; Jill, Roy, Lisa, Gary and Marc. Frank worked for Topps Baseball Cards as a machinist for many years before moving to Staten Island where he began working at Wagner College. He worked for the college in the shipping and receiving department. He enjoyed his job and the people he worked with and all he came in contact with there over the years. He retired in 2009. He was a family man who would go above and beyond for them. He was loving father, and doting grandfather. Frank was an avid sports fan and excellent softball player. He was a Golden Gloves Boxing Champion in 1948. His love of sports and family together had him create a family softball team which would play in many leagues over the years. He played until he turned 80. He also enjoyed bowling and bowled a 300 game. He is survived by his children Jill Davillo, Roy Fontanarosa and his wife Helen, Gary Fontanarosa and his wife Jeannie, and Marc and his wife Amy; his sisters Rosemarie Hios, Rachel Marra and Grace Venero; his eight grandchildren Jan, Carissa, Jon, Gina, Jessica, Maria, AJ and Aurora; and his four great grandchildren Syris, Jesse Jay, Asher and AJ and his loving dog and companion Nucky. He was predeceased by his wife Louise and his daughter Lisa Ferruci. A Mass of Christian Burial will be at 11:00 AM on Thursday at Holy Child Church located at 4747 Amboy Road Staten Island, New York 10312. Arrangements include private cremation. The family will receive friends from 2:00 PM to 4:00 PM and 7:00 PM to 9:00 PM on Tuesday and Wednesday at John Vincent Scalia Home for Funerals, Inc., 28 Eltingville Blvd, Staten Island, New York. In lieu of flowers, donations in Frank's memory may be made to the Grandma Louise Foundation at the College of Staten Island.

Frank ''Cheech'' Fontanarosa, 91 of Eiltingville, passed away on Sunday, September 26, 2021, at Richmond University Medical Center in Staten Island, New York. Born and raised in South Brooklyn, he was the son of the late Vincent and Carmella... View Obituary & Service Information

The family of Frank ''Cheech'' Fontanarosa created this Life Tributes page to make it easy to share your memories.

Send flowers to the Fontanarosa family.