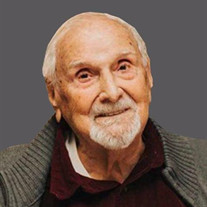 Frank Kosinski, 97 of Rosebank passed peacefully at home, in the presence of his loving family on September 3, 2020 after a long battle with dementia. He is predeceased by his wife Anna, 3 brothers and 1 sister. Together with Anna, his wife of 67 years, he raised three children, Carol, Paul and Laura. He was a proud grandfather to seven grandchildren and 12 great grandchildren. Frank was born on December 15, 1922 in Carteret, New Jersey. His family moved to Mariners Harbor when he was a toddler. He grew up there and graduated from Port Richmond High School. After High School he worked in the shipyards until he enlisted in the Navy in 1943. He served as a Sea Bee in the South Pacific Theatre during World War II and was honorably discharged in 1946. Upon his return to the States he again worked in the shipyards until he was sworn in as a NYPD Officer in 1948. Frank retired from the NYPD in 1969 and began a second career as a Wall Street bond clerk until his ultimate retirement in December 1984. Frank and Ann enjoyed traveling, movies and their family, especially spending time with their seven grandchildren. Frank's favorite hobby was DIY home improvement projects. Frank was the beloved husband to the late Anna. Cherished father to Carol Liddell (William), Deacon Paul Kosinski (Eilean) and Laura Meluni (Daniel), and dear grandfather to Amy Janicke, Paul Kosinski, Jr., David Kosinski, William Liddell, Catherine Hofmann, Joseph Meluni and Beth Ann Meluni. In addition to his children and grandchildren he is survived by 12 great-grandchildren. He was loved by all and will be missed. A Mass of Christian Burial will be held at 10:00 AM on Tuesday at St Joseph's Church located at 466 Tompkins Avenue, Staten Island, New York 10305. Interment will follow in St. Peter's Cemetery, Staten Island, NY. The family will receive friends from 4:00 - 8:00 p.m. on Monday, September 7, 2020, at John Vincent Scalia Home for Funerals, Inc., 28 Eltingville Blvd, Staten Island, New York.

Frank Kosinski, 97 of Rosebank passed peacefully at home, in the presence of his loving family on September 3, 2020 after a long battle with dementia. He is predeceased by his wife Anna, 3 brothers and 1 sister. Together with Anna, his wife... View Obituary & Service Information

The family of Frank Kosinski created this Life Tributes page to make it easy to share your memories.

Frank Kosinski, 97 of Rosebank passed peacefully at home, in...

Send flowers to the Kosinski family.