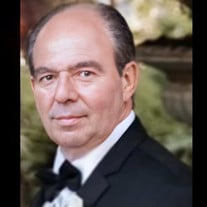 Frank Siracusa, loving husband, father, and grandfather passed away peacefully surrounded by family on September 4th after a long battle with pancreatic cancer. Frank was the son of Phyllis and the late Carmine Siracusa. Devoted husband of over 41 years to Romana Siracusa (Iacoviello). Loving father to his daughter Phyllis Pagnotta and son-in-law Richard, and son Carmine Siracusa and daughter-in-law Emily. Cherished grandfather to his favorite person in the world, his granddaughter Tonimarie Pagnotta. Frank was born on January 17th 1960 in New York, NY and grew up in Brooklyn, NY. Frank loved sports growing up, excelling as a football player in his teenage years. A hard-working man his whole life, Frank held many jobs as a youth involving various trades and business endeavors. He began his career as a New York City Marshal in 1989 and held his position for 32 years. Frank loved serving his city and was decorated for his service. In addition to his career, Frank spent his time involved in his children and grandchildrens activities, including spending many years coaching youth sports and attending any events in which they participated. Frank was also very active in his community. In 2018 he founded the Staten Island Civic Association, a civic group dedicated to improving the quality-of-life of his fellow Staten Islanders. He was honored in 2021 with the Stars & Stripes Democratic Club's Honoree of the Year award for his many years of community service and involvement in the City of New York. Above all of his personal and professional accomplishments in life, Frank enjoyed nothing more than spending time with his family and friends. He was always around to come by with his tools to fix or build something, to give advice and guidance, and to just call to see how everyone was doing. He loved hosting summer block parties and Christmas dinners at his home. His gravity-like presence always made everyone feel comfortable knowing he was around. In addition to his wife, mother, children, and grandchildren, Frank is survived by his sister Diane and brother-in-law John Petrillo, and sister Caroline. He is also survived by his many loving brothers and sisters-in-law, and many nieces and nephews from the Iacoviello family whom he loved as his own siblings and children. Frank will be remembered by all that knew him as a hard-working man that loved his family more than the world. A Mass of Christian Burial will be held at 10:30 AM on Thursday at St Thomas the Apostle Church located at 50 Maguire Avenue Staten Island, New York 10309. Entombment will be in Resurrection Cemetery, Staten Island, NY. The family will receive friends from 4:00 PM to 8:00 PM on Tuesday & Wednesday, at John Vincent Scalia Home for Funerals, Inc., 28 Eltingville Blvd, Staten Island, New York. Online condolences may be made to the family at www.scaliahome.com

Frank Siracusa, loving husband, father, and grandfather passed away peacefully surrounded by family on September 4th after a long battle with pancreatic cancer. Frank was the son of Phyllis and the late Carmine Siracusa. Devoted husband of... View Obituary & Service Information

The family of Frank C. Siracusa created this Life Tributes page to make it easy to share your memories.

Send flowers to the Siracusa family.