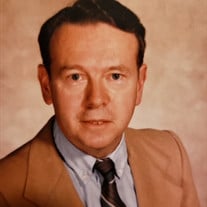 Gerald Xavier Lamb, of Eltingville, passed away on Monday November 15, 2021 at the age of 90 surrounded by his loving family. Born in Manhattan to the late Edmund and Veronica he has been a resident of Eltingville for the past 55 years. Gerald obtained his Bachelors Degree from Fordham University and his Masters Degree in Counselling from the College Of Staten Island. Gerald was an X ray technician serving in various hospitals throughout the City including the former Flower Fifth Avenue Hospital, Memorial Sloan Kettering, St. Clare's Hospital, Richmond Memorial Hospital and he retired from the Arthur Kill Correctional Facility. He was one of the first people to ever work for the Suicide Prevention Hotline in Manhattan, he worked as Drug and Rehabilitation Counselor in Susan Wagner High School. He was a member of the former Franciscan Friary in Todt Hill, and he was quite fond of the Latin Mass. He and his former wife Patricia coordinated and prepared couples for the Sacrament of Baptism at St. Clare Church for over 25 years. Gerald proudly served his country during the Korean War in the United States Army where he was the recipient of the National Defense Service Award. His children fondly remember the family vacations including the annual summer car trips to Florida and the early summer trips to Villa Roma.. He also was known for the chickens and rabbits he raised at his home. He had a great love for Gretchen his Dauschaund. Gerald was pre deceased by his devoted wife of 65 years Patricia who passed away in 2017. He is survived by his loving children Jerilynn Lamb- Pagone, Stephen, Mark and Melissa Lamb- Donath. Fond father-in-law to Ralph Pagone, Cindy Lamb, Sheila Lamb, and Keith Donath. Gerald was also the devoted grandfather to his 9 grandchildren Michael Pagone, Alyssa Wilson, Brian Lamb, Natalie Lamb, Jared Lamb, Samantha Lamb, Sophia Donath, Evan Donath, Abigail Donath and his 2 great grandchildren Cira Wilson and Thomas Lamb. A gathering of family and friends will be held on Thursday, November 18, 2021 from 2-4 & 7-9 p.m. at The John Vincent Scalia Home For Funerals Inc. 28 Eltingville Blvd. A Mass of Christian Burial will be offered Friday, November 19,2021, at The Church of St. Clare at 9:45 a.m. Following Mass, Gerald will be laid to rest with his late wife Patricia at Ocean View Cemetery with Military Honors.

Gerald Xavier Lamb, of Eltingville, passed away on Monday November 15, 2021 at the age of 90 surrounded by his loving family. Born in Manhattan to the late Edmund and Veronica he has been a resident of Eltingville for the past 55 years.... View Obituary & Service Information

The family of Gerald X. Lamb created this Life Tributes page to make it easy to share your memories.

Gerald Xavier Lamb, of Eltingville, passed away on Monday November...

Send flowers to the Lamb family.