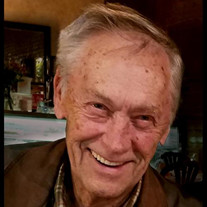 Gerald Louis Westrom (Jerry), age 83, died in his home in Staten Island on February 3, 2022. Devoted husband, beloved father and grandfather, Jerry was born in 1939 in Elbow Lake, Minnesota, to Louis Westrom and Florence Anderson. After high school he enlisted in the Army and was stationed in Brooklyn, New York, where he met and married Betty Lou Sciarello in 1960. They celebrated sixty two years of marriage earlier this year. Skilled carpenter, avid fisherman, hunter, chess player, bowler (with more than one perfect game to his credit), card player, long-suffering Mets fan, and World of Warcraft enthusiast. Jerry found a lot of joy in his life and his family and anyone who knew him will remember him long and fondly. He is survived by his wife, Betty Lou, his daughters, Denise, Elizabeth and Lauren, his sons, Robert and Glenn, and his five grandchildren. He is also survived by his brothers, Stan and Louis, and his sister Yvonne. The family will receive friends from 2:00pm to 4:00pm and from 7:00pm to 9:00pm on Monday, February 7, 2022, at the John Vincent Scalia Home for Funerals, 28 Eltingville Blvd, Staten Island, New York. Jerry will be taken at 10am on Tuesday, February 8, 2022, from the John Vincent Scalia Home for Funerals, to the chapel of St. John's Cemetery, Middle Village, NY for internment. Donations in his honor can made to St. Jude Children's Research Hospital, https://www.stjude.org Online condolences may be made to the family at www.scaliahome.com

The family of Gerald L. Westrom created this Life Tributes page to make it easy to share your memories.

Send flowers to the Westrom family.