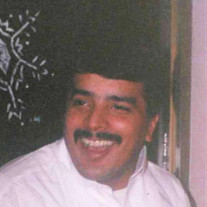 Geraldo ''Jerry'' Garcia passed on peacefully due to complications from his illness on February 6, 2022, in Brooklyn, NY. Born on September 11, 1960, in Philadelphia, PA, Geraldo was the loving son of Raquel Bassat and the late Quinton Garcia. Among those mourning the immense loss of Jerry are his most cherished children Jessica, Andrew, and his son in law Peter. His beloved Grandchildren John Peter, Gerard Michael and Peter Raphael, his adoring Brothers and Sisters, Angel, Danny, Daisy, Nancy, Johnny, Cindy and Aida. He is preceded in Death by his brother Ricky. He will also be missed by his many nieces and nephews who he immensely loved as well. Jerry's main mission was to make you laugh no matter what you were going through. He was there to guide you with his many words of wisdom and gift for gab, his humor was endless even till the end. He loved the Mets and would love to talk about the greats of the boxing world. He loved animals and would do anything for his family and friends. He was proud of his children and held his grandchildren in the highest regard. He was always the peacemaker, held his values close and taught his children to always remember to stop and just enjoy the simple things as he often did. He will be deeply missed. The Family will receive friends from 4-8 p.m. on Thursday February 10 at John Vincent Scalia Funeral Home for Funerals, Inc., 28 Eltingville Blvd, Staten Island, New York. A Mass of Christian Burial will be held on Friday February 11, 2022, at St. Thomas at 10:30. Interment to follow will be held at Chestnut Hill Cemetery in East Brunswick, New Jersey.

Geraldo ''Jerry'' Garcia passed on peacefully due to complications from his illness on February 6, 2022, in Brooklyn, NY. Born on September 11, 1960, in Philadelphia, PA, Geraldo was the loving son of Raquel Bassat and the late Quinton Garcia.... View Obituary & Service Information

The family of Geraldo Garcia created this Life Tributes page to make it easy to share your memories.

Send flowers to the Garcia family.