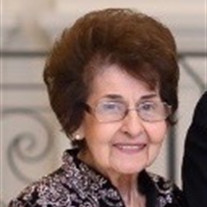 Gloria Melillo, 87, a longtime Grant City resident, passed away on May 1, 2020. Gloria was born on April 27, 1933 to Anna and Sebastian Bartolotta in Lawrence, Massachusetts. She had one brother, Joseph Bartolotta who passed away in 2018. The family moved to Brooklyn when she was a young girl and then to Staten Island in 1947. She was a parishioner of St. Christopher's Church. She worked for Schroders Bank in Manhattan, Garber's Department Store and ADCO Electrical, both in Staten Island. She was also a part time waitress on the weekends at the Lancaster Lounge in Grant City for many years. She was a loving, caring and exceptional mother who was dedicated to her son, Michael, who she raised by herself. She worked two jobs to provide him with everything she possibly could. She was always there to spend time with him and tend to his needs, even with no sleep. Michael was in her words, ''Her Heart'' and those were the last words Gloria said to him. She always referred to her daughter-in-law, Lois, as the daughter she never had. The joys of her life were her three grandchildren and she spent as much time as she could with them, even as they got older. Reminiscing with family was something she was very fond of. She would tell stories of growing up and what it was like years ago. She was the center of our family and left us with many beautiful memories. Gloria will be forever in our hearts. Gloria was also a loving and caring friend to many. She lived a wonderful life and cherished her relationships with all her friends. She was a remarkable woman who was always there to lend a helping hand to anyone in need. She was a member of both the New Dorp Senior Center and most recently the Arrochar Senior Center. She especially liked to go on trips with the center and loved playing cards and bingo. Years ago, Gloria was an avid bowler where she was on a league at Bowling on the Green. After retiring, she spent her leisure time shopping with her friends. Her favorite places to go were flee markets and country shops in Pennsylvania. Gloria is survived by her son, Michael, daughter-in-law, Lois, and three grandchildren, Tiffany, Michael and Gianna. Funeral Arrangements are entrusted to the John Vincent Scalia Home for Funerals in Eltingville. A memorial mass will be held in her honor on Tuesday, July 21, 2020 at 10am in St. Christopher's Church, Grant City. Burial will follow in St. Peter's Cemetery, West Brighton.

Gloria Melillo, 87, a longtime Grant City resident, passed away on May 1, 2020. Gloria was born on April 27, 1933 to Anna and Sebastian Bartolotta in Lawrence, Massachusetts. She had one brother, Joseph Bartolotta who passed away in 2018. The... View Obituary & Service Information

The family of Gloria Melillo created this Life Tributes page to make it easy to share your memories.

Send flowers to the Melillo family.