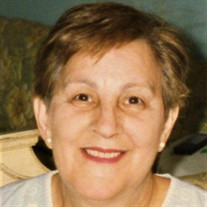 Gloria A Pinnola, 92, passed away peacefully on Sunday, May 23, 2021, at her home with her loving family at her side. Born in Schenectady, NY, on February 11, 1929, Gloria was the daughter of the late John and Pasqua DeCarlo; and wife of the late Frank A Pinnola who passed away in 2002. A graduate of Nott Terrace High School and Spencer Business School, Gloria worked for the General Electric Company in Schenectady. She married in 1959 and moved to Staten Island to become a mother and homemaker. She returned to work in the 1980’s and was employed at JP Morgan Guaranty Trust Company until her retirement in 1993. Gloria enjoyed participating in events at the Staten Island Senior Center, traveling, swimming, and most especially summers with family and friends at Sacandaga Lake. Gloria is survived by her son, Frank (Kathy) of, Middletown NJ and by five grandchildren, Joseph Pinnola-Vizza, Frank and Thomas Pinnola, Lydia and Julia Vizza. She is also survived by several nieces and nephews. Gloria was predeceased by her loving son, John (Jill) Pinnola who passed away in 1997. Gloria was also predeceased by her sisters Angelina Allen, Jennie Pallutti and Santina DiDio; and by her brothers, Anthony, Armondo, Albert and Michael DeCarlo. Gloria was blessed to have a close friend, Patricia (Frank) Goebel, who she called her adopted daughter. She was also very blessed to have been lovingly cared for by Regina Horton and the late Grace Gbadyu. The family will receive friends from 2:00 PM to 4:00 PM and 7:00 PM to 9:00 PM on Wednesday, May 26, 2021, at John Vincent Scalia Home for Funerals, 28 Eltingville Blvd, Staten Island, New York. A Mass of Christian Burial will be held at 11:15 AM on Thursday, May 27th at Our Lady Star of the Sea Church, 5411 Amboy Rd, Staten Island. Interment will be in Resurrection Cemetery.

Gloria A Pinnola, 92, passed away peacefully on Sunday, May 23, 2021, at her home with her loving family at her side. Born in Schenectady, NY, on February 11, 1929, Gloria was the daughter of the late John and Pasqua DeCarlo; and wife of the... View Obituary & Service Information

The family of Gloria A. Pinnola created this Life Tributes page to make it easy to share your memories.

Send flowers to the Pinnola family.