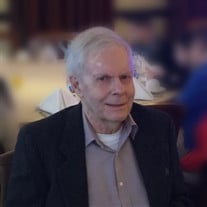 Gustav R. Bellisari - Family Always Came First Army veteran, loving husband and father, devoted brother, Gus Bellisari, 89, of Arden Heights, passed away on March 31, 2022 surrounded by those he loved the most - his son Steven, daughter-in-law Regina, and their three dogs, BB (the king), Max, and Stella. Gus was the beloved son of the late Gustavo and Mary Bellisari, enamored husband to the late Anny Bellisari, and dedicated brother to the late Marilyn Bellisari. Gus was born in Brooklyn, NY in the winter of 1933. After spending time in the Army during the Korean War, he came back to Brooklyn where he and his best friend Ralph DiGennaro found the love of their lives when they met Norwegian sisters Ann and Sigfrid. Having spent his career in the Office of Naval Services as a contract administrator, his two true passions were his family and playing basketball. As most Brooklynites do, Gus crossed the Verrazano Bridge into Staten Island where he settled in Village Greens. One of the biggest draws was the basketball courts where you could find him every Sunday morning playing hoops with the ''kids'', which was then followed by Sunday dinner with the family. Gus is survived by his son and daughter-in-law, his best friend and sister-in-law, nieces, nephews, cousins, and his grandpuppies. We would be remiss if we didn't also mention the wonderful people who took care of him through his prolonged illness that became his good friends and could always get him to laugh. The family will receive friends from 2:00 - 5:00 p.m. and 7:00 - 9:00 p.m. on Sunday, April 3, 2022, at the John Vincent Scalia Home for Funerals, Inc., 28 Eltingville Blvd, Staten Island, New York. A Funeral Service will be held at 10:30 a.m. on Monday, April 4, 2022 at the Funeral Home. Interment will follow in Moravian Cemetery, Staten Island, NY.

The family of Gustav R. Bellisari created this Life Tributes page to make it easy to share your memories.

Send flowers to the Bellisari family.