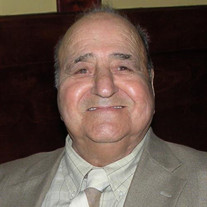 James DeFalco, 96 of Staten Island, New York, passed away peacefully in his home on October 23, 2021. Born on January 9, 1925, he was the son of the late Salvatore and Carmela DeFalco and brother to 6 siblings. He was the beloved husband to Madeline, for 76 years. Loving father to Geraldine Caravella and the late Salvatore DeFalco. Cherished brother of Gommie DeFalco. and the late Bernard, Dominic, Lee, Tata, and Carrie. Dear father-in-law to Fred Caravella and Margaret DeFalco. James was also the devoted grandfather to his 6 grandchildren, Jimmy, Jill, Jane, Lola, Jamesy, and Sal, and 12 great-grandchildren who all adored him. He will also be missed by his many nieces and nephews. James joined the U.S. Navy where he served in World War II on the U.S.S. Hornet as a chief warrant officer. He became an electrician with the Baltimore and Ohio Railroad before he and his brothers became partners in the Arrochar Market. The brothers also ran the arcade in South Beach for 6 years. After James retired from the business, he drove a school bus for a high school in Kingston, New York. James loved nothing more than being surrounded by his family, telling jokes, and entertaining his great-grandchildren with his fun-loving personality. The family will receive friends from 6:00-9:00 on Sunday, October 24th at the John Vincent Scalia Home For Funerals, Inc., 28 Eltingville Blvd., Staten Island, New York. A Mass of Christian Burial will be celebrated at 11:15 a.m. on Monday, October 25, 2021 at Our Lady Star of the Sea Church located at 5411 Amboy Rd, Staten Island, New York. Interment following at Resurrection Cemetery. Online condolences may be made to the family at www.scaliahome.com

James DeFalco, 96 of Staten Island, New York, passed away peacefully in his home on October 23, 2021. Born on January 9, 1925, he was the son of the late Salvatore and Carmela DeFalco and brother to 6 siblings. He was the beloved husband... View Obituary & Service Information

The family of James B. DeFalco created this Life Tributes page to make it easy to share your memories.

Send flowers to the DeFalco family.