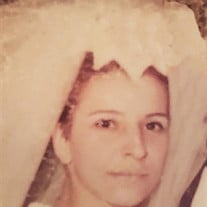 Jeanette Iannaccone, 74, of Great Kills passed peacefully on Saturday, February 12 after a 40-day battle with COVID Pneumonia. She fought vallantly but eventually her big beautiful heart gave out. Born in Brooklyn to Simon Lewis and the former Helen Truppelli, she was the middle child, bracketed by Mary and Harold. After attending PS187, PS176, McKinley JHS, she graduated from New Utrecht HS in 1965 and remained friends with many former classmates from each school. Upon graduation she began working at Irving Trust where she remained for 9 years as a bookkeeper and account manager. In 1967 she married Jerry, who she met in 1962 at Manhattan Beach. In 1974, she retired upon the birth of Staci, who was followed 4 years later by Jennifer. By this time the new family had moved (1976) into what they thought was their starter house. They are still there 45 years later. As her daughters were attending local schools, Jeanette worked as a sales person at the Fantasies Lingerie (Macys) store in the SI Mall and when that closed she was hired as an art gallery assistant at the Warners Bros. Studio Store. With this hiring, Jeanette found that she had a passion for selling and in her 13 years with WB, earned Manager of the Year awards four times. After the WB store closed, Jeanette continued selling art until her passing for galleries in Soho and Las Vegas. While at Animazing Gallery she earned the top sales consultant award for 2007 and was rewarded with a trip to a 900 year old castle in the southern France. That trip included also included stops in Normandy and Paris. She loved traveling: visiting Hawaii, France, Switzerland, Spain, Austria, Italy and her second home, Las Vegas. A big sports fan, she rooted loudly for the Mets and football Giants. One of her prized possessions was a 1986 World Champion NY Met Cabbage Patch Doll. That victory was very special as the victory was over husband Jerry's Red Sox. She loved with all her being, her two beautiful daughters, Staci and Jennifer, her sister Mary, niece Samantha, the Truppelli family, the Lewis family, her many friends and her husband of 54 plus years, Jerry. But her special loves remained her beautiful granddaughter Tahlia McKenzie and her handsome grandsons Patrick Michael and Ryan Joseph. A former colleague wrote a condolence note that included ''Her sense of humor, common sense warmth and incredible ability to connect with people of all walks of life are things I�ve been inspired by and thought about often. I can�t think about my time in New York without thinking of her.'' THAT SAYS IT ALL! The family will receive friends from 4:00 PM to 8:00 PM on Wednesday, February 16, 2022, at John Vincent Scalia Home for Funerals, Inc., 28 Eltingville Blvd, Staten Island, New York. A Funeral service will be at 11:00 AM on Thursday, February 17, 2022, at John Vincent Scalia Home for Funerals, Inc., New York 10312. Interment will be in Resurrection Cemetery, Staten Island, NY. In lieu of flowers, the family kindly asks you consider a donation to St. Jude Childrens Hospital or the Tunnel to Tower Foundation.

Jeanette Iannaccone, 74, of Great Kills passed peacefully on Saturday, February 12 after a 40-day battle with COVID Pneumonia. She fought vallantly but eventually her big beautiful heart gave out. Born in Brooklyn to Simon Lewis and the former... View Obituary & Service Information

The family of Jeanette Iannaccone created this Life Tributes page to make it easy to share your memories.

Send flowers to the Iannaccone family.