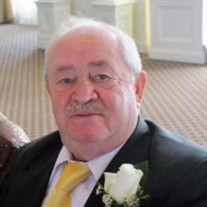 John Amato, 83, of Millstone Township, New Jersey passed away on Friday, February 4, 2022, at home surrounded by his loving family. Born Saturday, July 9, 1938 in Senerchia, Italy, John was the son of the late Alessandro and Ersilia Amato. John was raised in Italy. Growing up in the town of Senerchia, he would become friends with Angela, they would eventually begin a courtship, which turned into more than 60 years of marriage. The couple would immigrate to the United States in 1962, living first in Brooklyn, then Long Island City, before settling in Staten Island, and then retiring to New Jersey. In 1986, John opened a restaurant, Villa Portofino. After retirement, he spent years of his time cooking for the nuns at St. John's Villa Academy, in Staten Island. John enjoyed going hunting and playing cards. He was an extremely friendly and loving man, who enjoyed cooking for his family and friends. It was hard to pick his favorites, but he loved making different pasta dishes. In his spare time John enjoyed antiquing and playing lotto games. John is survived by his beloved wife of more that 60 years, Angela, by his loving children, Angela DeCaro and her husband Vincent, Alessandro Amato and his wife Antonia, and John Amato Jr., by his caring siblings Liliana, Lina, Irma and by his cherished grandchildren, Nicole, Alyssa, Kristen, Vincent, Maria, and Domenica, and by many loving nieces and nephews. The family will receive friends from 2:00 PM to 6:00 PM on Sunday, February 6, 2022, at The John Vincent Scalia Home For Funerals, Inc., 28 Eltingville Blvd. (at Eltingville Station), Staten Island, New York. A funeral mass will be held at 11:00 AM on Monday at Holy Child Church located at 4747 Amboy Rd Staten Island, New York 10312. Interment will be in Resurrection Cemetery, Staten Island, NY.

The family of John Amato created this Life Tributes page to make it easy to share your memories.

Send flowers to the Amato family.