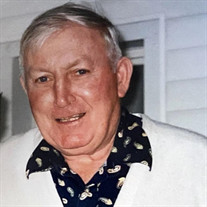 John T. Carroll, 92 of Eltingville passed away peacefully on Sunday, November 14, 2021, at home surrounded by his loving family. Born Thursday, June 20, 1929 in Brooklyn, New York, he was the son of the late James Carroll and the late Catherine Fitzpatrick Carroll. John, a Brooklyn Native was a graduate of Xavarian High school. Following high school, John enrolled in The United States Navy serving Active Duty from 1948-1950 before being honorably discharged. Upon his return from the Navy, John joined the NYPD in 1952 serving as Officer then Detective until transferring to FDNY in 1958. John's career spanned 30 years as a firefighter, climbing the ranks to Battalion Chief of Ladder Company 114 (Tally Ho) in Brooklyn, NY. John spent a lifetime serving others not only in his professional life, but dedicating his service to Volunteer work as well. John was the former President of the Anchor club for the FDNY, which organized not only toy drives for kids but visits to Hospitals and the like for people in need. John also volunteered as a driver for Meals on Wheels, and was always ready with a helping hand for anyone who reached out.. John was a lifetime member of the Great Kills Yacht Club, where he spent much of his free time with his second love, his Beloved boat ''Shebeen''. John loved to be out on the water, as evident with his travels with his wife Barbara ''Bobby'', 2 trips to the South Pacific once for 30 days and another for 31. John was an avid NY Giants fan, and cheered them on till the very end. John will be remembered as a ''Man of few words'' but his actions were a tribute to the man he was, he served as a true role model to his 6 children, 20 grandchildren and 4 great grandchildren as well as his colleagues, friends and extended family. He was the beloved husband of 65 years to his best friend, Barbara ''Bobby'' (Scully) Carroll. Loving father of John Carroll (Eileen), Mary Kilgannon (John), Barbara Ammendola (Richie), Steven Carroll (Susan), Linda Mooney (Thomas), and Nancy Carroll (Patrick Reilly). Dear brother of the late Josephine, Marie, Billy, James, Danny, Robert, and Kathleen. Cherished grandfather of 20, Great grandfather of 4 and was anxiously awaiting the birth of his 5th great grandson. A Mass of Christian Burial will be offered at 10:00 AM on Thursday, at Holy Child Church located at 4747 Amboy Road Staten Island, New York 10312. Interment will follow in Resurrection Cemetery, Staten Island, NY. The family will receive friends from 2:00 PM to 4:00 PM and 6:30 PM to 9:00 PM on Wednesday, November 17, 2021, at John Vincent Scalia Home for Funerals, Inc.., 28 Eltingville Blvd, Staten Island, New York. In lieu of flowers memorial contributions in memory of John may be sent to Stephen Siller Tunnel to Towers Foundation,2361 Hylan Boulevard Staten Island, NY 10306. Forms will be available at the Funeral Home, or online at www.t2t.org

John T. Carroll, 92 of Eltingville passed away peacefully on Sunday, November 14, 2021, at home surrounded by his loving family. Born Thursday, June 20, 1929 in Brooklyn, New York, he was the son of the late James Carroll and the late Catherine... View Obituary & Service Information

The family of John T. Carroll created this Life Tributes page to make it easy to share your memories.

John T. Carroll, 92 of Eltingville passed away peacefully on...

Send flowers to the Carroll family.