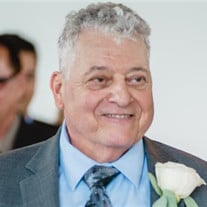 John DiTrapani of Eltingville passed away on Sunday November 7, 2021 at the age of 67. Born in Brooklyn to the late Ignazio and Quintilia (Amalia), John worked for many years a Corrections Officer for the New York City Department of Corrections. John was a man of many varied interests, talents and hobbies. He enjoyed going to car auctions, he had an extreme passion for his Harley Davidson motorcycle. He loved good games of cards and was strategic. In his position as a Corrections Officer he influenced many inmates entrusted to his care, who were experiencing difficult times, with the hope of helping them turn their lives around, for the better. His demeanor was one where he was truthful and brutally honest with you, but never judgemental towards anyone. He tried to seek out the inner good in each person he came in contact with. John was a lover of all animals, and often took in strays to care for them. He was blessed with a rare gift that he could fix or build anything, to say he was a true handyman would be an understatement. His personality led him to be a role model and father figure to friends and neighbors alike. One of his greatest joys came from making others happy as was evidenced by his playing Santa every year for children in Hospitals and orphanages. His greatest joy , however, was found when he was with his family. John is survived by his devoted wife of 47 years Marie. His loving daughters Marie Montelibano, Toni and Nicole. His son in laws Michael Montelibano and Dylan Conway. He was predeceased by three children, Simone, John and Anthony. He is also survived by his aunts, siblings, in-laws, cousins and many loving nieces and nephews. Family and friends are asked to gather on Friday from 4- 9 pm at The John Vincent Scalia Home For Funerals Inc., 28 Eltingville Blvd. Staten Island, NY. The funeral will be on Saturday, with a Mass of Christian Burial being offered at The Church of the Holy Child at 10:00 a.m. Following Mass the interment will take place in Resurrection Cemetery.

John DiTrapani of Eltingville passed away on Sunday November 7, 2021 at the age of 67. Born in Brooklyn to the late Ignazio and Quintilia (Amalia), John worked for many years a Corrections Officer for the New York City Department of Corrections. John... View Obituary & Service Information

The family of DiTrapani, John created this Life Tributes page to make it easy to share your memories.

John DiTrapani of Eltingville passed away on Sunday November...

Send flowers to the DiTrapani family.