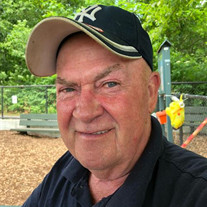 John Murphy​​​​​ John Murphy of Eltingville passed away peacefully at the age of 75 on March 2, 2022. Born in Bay Ridge, Brooklyn, John was the devoted brother of the late Dennis Murphy and Margaret Church, and son of the late Dennis and Elizabeth Murphy. John was a US Army Veteran who served honorably in the Vietnam War, earning several commendations. After completing his service, he worked at the Department of Sanitation at Fresh Kills, retiring as a Superintendent after 23 years. During that time, John moved to New Dorp and eventually settled in Eltingville. After completing his tenure at the DSNY, he then began a second career at the United States Postal Service as a postal police officer for over 10 years. John was passionate about his dogs, Shane and Chloe, and was a fixture at the Wolfe’s Pond Park dog run where he generously donated his time. He met lifelong friends (both human and canine) during his many years visiting with his beloved pets, including Lily, Casey, and Pockets. John’s friends will always remember him having pockets full of treats for their furry family members. He also loved taking trips to Las Vegas and Atlantic City, and rooting for his favorite sports teams, the New York Yankees and Giants. John was a generous, caring, and kind-hearted man, who will be missed deeply by his numerous friends and family. He is described by those who knew him as a wonderful soul and a real gentleman. He is survived by his loving sisters, Carol Zazzera and Patricia Paholek, and his many devoted nieces and nephews spanning three generations; known and remembered by all as “Uncle Johnny.” The family will receive friends from 3:00 to 8:00 PM Friday, March 4th, at John Vincent Scalia Home for Funerals, Inc., 28 Eltingville Blvd, Staten Island, New York. A prayer service will be held at 10:15 AM on Saturday, March 5th at Scalia’s. Interment will follow in Resurrection Cemetery, Staten Island, NY.

The family of John F. Murphy created this Life Tributes page to make it easy to share your memories.

Send flowers to the Murphy family.