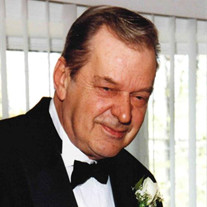 John Vanderstar, 85, of Eltingville, passed away on Monday, January 24, 2022, at Staten Island University Hospital South. Born Thursday, October 1, 1936, John was a native of Staten Island, born and raised in Four Corners, he settled in Eltingville in 1967. He was the son of the late John and Luellyn Vanderstar and was a graduate of Curtis High School. He honorably served in the US Marine Corp from 1957-1958, ending his career with the rank of Corporal with the eternal thanks of a grateful nation. John also served as an officer with the NYPD until deciding to pursue his dream of entrepreneurship in opening and operating Vanderstar Construction Company. John was known above all else, as a loving and dedicated family man. His late wife, Maureen, was surely there to bring John to his heavenly home. Mourning the loss of John are his cherished children Gerald (Antoinette), John (Dawn), Steven, and Cathy (Robert) Reid, his nine adoring grandchildren, and one great-grandson. The family will receive friends from 2-5 & 7-9 p.m. and a Funeral Service will be at 8 p.m. on Thursday, January 27, 2022, at John Vincent Scalia Home for Funerals, Inc., 28 Eltingville Blvd, Staten Island, New York. In lieu of flowers, the family asks that donations in memory and honor of John be given to Stephen Siller Tunnel To Towers Foundation at www.t2t.org

The family of John Vanderstar created this Life Tributes page to make it easy to share your memories.

John Vanderstar, 85, of Eltingville, passed away on Monday, January...

Send flowers to the Vanderstar family.