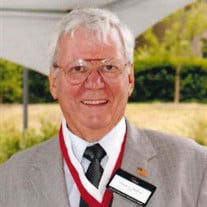 Joseph Arnold Albanese, 88, passed away on Friday at his home in Great Kills with his wife by his side. A Mass of Christian Burial will be at 10:00 AM on Tuesday at Holy Child Church located at 4747 Amboy Road Staten Island, New York 10312. Interment will be in Resurrection Cemetery, Staten Island, NY. The family will receive friends from 3:00 PM to 8:00 PM on Monday, June 6, 2022, at John Vincent Scalia Home for Funerals, Inc., 28 Eltingville Blvd, Staten Island, New York. In lieu of flowers, donations in Joseph's memory may be made to the Tunnels to Towers Foundation or The Wounded Warrior Project. Joseph was a devoted husband, father and grandfather, Joe was a soldier, a pharmacist, a professor and a die-hard Yankee fan. He was born in Astoria, Queens on Oct. 23, 1933 where he lived with his parents, Victor and Jean. He played stickball in the street, where two sewers was a homerun. Joe was ever the student and teacher. He graduated from St. John's University with a degree in pharmacology in 1955 and often said pharmacy school was the hardest thing he ever did. After St. John's, he followed in his father's footsteps and joined the Army National Guard. He spent 15 weeks in Fort Sam, Texas at the Army Medical Service School where he dodged more than one rattlesnake in the dark. He spent 12 years in the Army Reserves and he was very proud of his service. Joe then worked as a pharmacist and science teacher and met his beloved bride, Patricia, when they both worked at Junior High 126 in Brooklyn. He taught at Aviation High School in Queens before he and Pat moved to Great Kills in 1964, some of the island's pre-bridge settlers. He started a master's program at Long Island University and though he never finished, he met his life-long best friend in the men's room, comparing answers after an exam. He would earn his Master's in Education from Wagner College and then his PhD in Drug Education from Fordham University in 1977. While teaching general science and biology at New Dorp High School, Joe was offered a part-time job at the College of Staten Island, the school which would eventually define his career. He became a full professor at CSI and taught "bugs and drugs" as he called it -- bacteriology and pharmacotherapeutics-- for a quarter of a century to hundreds of nursing students who affectionately called him Dr. Joe. He was known to be tough but fair. He was named Professor Emeritus and he retired in 1990 but continued to guest lecture on many topics. In 1978, he became a published author with his first book, "Drug interactions: Basic principles and clinical problems." He followed with two editions of "Nurses" Drug Reference's a few years later. That book became repackaged into a set of Nursing Drug Cards, a best-seller among nursing students. He would produce more than 24 editions of those cards. Joe loved gardening; he grew giant cucumbers, juicy tomatoes and always had the best lawn on the block. He enjoyed hunting deer in Oneonta, antelope in Wyoming and fishing anywhere he could. He was a competitive benchrest shooter at the Colonial Rifle and Pistol Club and used his mastery in chemistry to make his own ammunition, always experimenting to find the perfect balance of elements that would yield the most accurate bullets. He enjoyed trapshooting as a member of the Staten Island Sportsmen's Club. He loved listening to opera and once he discovered Youtube, spent hours listening to it at his computer In retirement, he and Pat traveled the world. They swam the Great Barrier Reef in Australia, heli-hiked in Vancouver and chartered a sailboat in the British Virgin Islands, but his favorite place to visit was Italy. His favorite pastime of all was cheering on the Yankees and the Johnnies. He inherited his love of the Bronx Bombers from his father, an Italian immigrant and a barber who cut the hair of many Yankee greats, including the Yankee Clipper himself. He attended hundreds of Yankee games with his father, and then with his daughters and grandchildren and saw two World Series games. He was a season ticket holder to the Red Storm and everyone around him at Alumni Hall knew the game was in the bag when Joe put on his lucky button. He followed SJU to the 1985 Final Four in Kentucky, and even though he didn't see them win, seeing Georgetown lose was almost as good. According to Joe, no one could hit and field like Joe DiMaggio or shoot baskets like Chris Mullin. He adored his bride, as he still called her, his three children and eight grandchildren. He is survived by his wife of 62 years, Pat; his children Alex, Joanne Young (King) and Jeanne (Chris Centore) and his grandchildren Dylan, Brandon, Kayla, Jaclyn and Connor Young and Henry, Bodie and Angelina Centore. Online condolences may be made to the family at www.scaliahome.com

Joseph Arnold Albanese, 88, passed away on Friday at his home in Great Kills with his wife by his side. A Mass of Christian Burial will be at 10:00 AM on Tuesday at Holy Child Church located at 4747 Amboy Road Staten Island, New York 10312.... View Obituary & Service Information

The family of Joseph Albanese created this Life Tributes page to make it easy to share your memories.

Joseph Arnold Albanese, 88, passed away on Friday at his home...

Send flowers to the Albanese family.