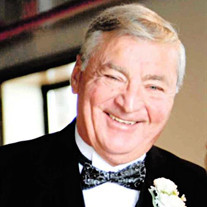 Joseph W. Brandefine, 72 a lifelong Staten Islander, passed away on Sunday, February 20, 2022, at Home surrounded by the love of his family. Born Tuesday, March 22, 1949 in Staten Island, he was the son of the late Patrick Brandefine and the late Rose (Maddox) Brandefine. Joseph or ''Billy'' to many of his friends, grew up on Staten Island, completed high school and joined the police academy. Upon completion Joe joined the United States Army and served from 1968- 1970 as Military Police. Following his discharge from the Army, Joe returned to Staten Island and became a Detective for the NYPD proudly serving his community for over 20 years, retiring in 1991. After his retirement Joe went on and became one of the founding partners for United Security, working another 20 years before his second retirement in 2010. Joe was an active member of Stephen Siller - Tunnel to Towers Foundation serving as Golf Committee Member, An organization he held close to his heart even till his last days. When not working or volunteering, Joe loved golf, playing especially but also watching and organizing outings. Joe enjoyed the spotlight and shined in one of his favorite pastimes, Karaoke, He was a avid collector of sport memorabilia especially baseball cards. But most important to Joe were his friends and family, his children and grandchildren were the true meaning of life to him. He was the beloved husband of 50 years to Laura (Heineman) Brandefine. Loving father of William Brandefine, Alaina Giudice, Joseph Brandefine, and Kristy Gilsenan. Dear father in law of Stefanie Brandefine, Michael Giudice and Brian Gilsenan. Adored brother of Raymond Brandefine, Roseann Scully, and Patricia Candelino. Cherished grandfather of Joseph, Adalyn, Lilah, and Jack. A Mass of Christian Burial will be offered on Friday February 25, 2022, 11:00 a.m., at Our Lady Star of the Sea Church, located at 5411 Amboy Road, Staten Island, 10312. Private Cremation to Follow. The family will receive friends from 7:00 PM to 9:00 PM on Wednesday, February 23, 2022, and 2:00 PM to 4:00 PM and 7:00 PM to 9:00 PM on Thursday February 24, 2022, at John Vincent Scalia Home for Funerals, Inc., 28 Eltingville Blvd, Staten Island, New York. If you should so desire donations in Memory of Joseph may be made to: Tunnel to Towers Foundation, online at https://t2t.org/donate/ or via mail at: Tunnel to Towers Foundation 2361 Hylan Blvd. Staten Island, NY 10306

Joseph W. Brandefine, 72 a lifelong Staten Islander, passed away on Sunday, February 20, 2022, at Home surrounded by the love of his family. Born Tuesday, March 22, 1949 in Staten Island, he was the son of the late Patrick Brandefine and... View Obituary & Service Information

The family of Joseph W. Brandefine created this Life Tributes page to make it easy to share your memories.

Send flowers to the Brandefine family.