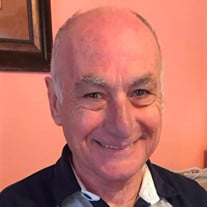 Louis DeMichele, 82 , passed away on Friday, February 5, 2021. Born to Grace Steo and James DeMichele in Brooklyn NY on December 6, 1938, died on February 5, 2021. He is survived by his wife Dolores DeMichele, 81, and their 3 children Louis, 57 (wife Karen, daughter Melissa 20, Krista 17) Theresa, 56 (son Noah 14) and Debbie, 54 (sons Robert 22 and Matthew 18) At 18 years old, Louie left his childhood home ,where he grew up with his oldest sister Elizabeth Butera, youngest sister Theresa Lehan, and youngest brother Vincent (who predeceased him 5 years ago) to join the U.S. Army. He was stationed in Louisville, Kentucky and drove army tanks. He was honorably discharged after serving his 4 year term. Upon leaving the army, Louie was introduced to the New York Post and NMDU, where he remained employed for almost 40 years. Towards the end of his career, he became politically active in the Union and served on the Executive Board. One of his most notable accomplishments was implementing Union by-law changes prohibiting potential ''side deals'' that could potentially threaten every members job. Louie married his wife Dolores Cavallo on August 25, 1962. In 1972 they bought their first house and migrated to Staten Island to raise their 3 children. Louie was a loving husband, devoted father and provider, adoring grandfather, brother, friend and mentor to many. He had a great sense of humor, quick wit, and giving nature. He accepted life on life's terms, didn't complain much, and believed in focusing on what was right with the world rather than what was wrong. He believed in giving people chances and always saw the potential in others Louie had a curious mind and never stopped reading and learning. He was an avid crossword puzzle lover, was smart, articulate and informed. Louie was someone you could talk to about anything and everything. In his younger years, Louie enjoyed playing sports: handball, paddle ball and hardball, going to the Poconos and Atlantic City, horse racing, and eventually playing pinochle and poker at home with his family and friends. Louie had an infectious smile, a warm and fun loving personality and was always up for a good prank. He also adored children and they him. Over 12 years ago he was diagnosed with Alzheimer's and those who loved him watched in horror as the disease began to slowly, but maliciously rob him of his essence. On February 5th, after a valiant fight, he lost his battle against dementia. The world has lost one of its brightest lights and will be grayer without his loving energy in it. May he Rest In Peace knowing he was deeply loved, touched many lives and left an indelible mark of a man with a strong work ethic, and an honorable and dignified character. The family will receive friends from 5:00 - 9:00 p.m. on Monday, February 8, 2021, at The John Vincent Scalia Home For Funerals, Inc., 28 Eltingville Blvd. (at Eltingville Station), Staten Island, New York. A Mass of Christian Burial will be at celebrated at 11:00 a.m. on Tuesday, February 9, 2021 at Holy Child Church located at 4747 Amboy Rd Staten Island, New York 10312. Cremation will be private. Please be mindful due to the current State mandate that a mask must be worn at all times in the funeral home and social distancing requirements must be followed during the services. Due to the current Pandemic a strict 30 person in room policy is in effect, as well as a maximum of 200 people permitted in Church. Please adhere to this policy and allow others to pay their respects as well. Due to the current pandemic circumstances please note: We do not accept deliveries from outside vendors for bakery products, fruit baskets, and floral arrangements until further notice. Floral Arrangements can be purchased from our in house floral designers who work under the most stringent sanitary conditions which include temperature checks, mask wearing, distancing and protective clothing. You can call 718-948-2016 and place your order. We must protect the families we serve, our own families and staff who operate the funeral home.

The family of Louis DeMichele created this Life Tributes page to make it easy to share your memories.

Send flowers to the DeMichele family.