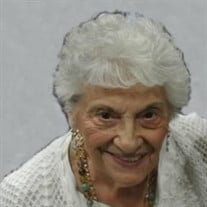 Madeline DeFalco, 95 of Staten Island, New York passed away in her home on January 6, 2022 surrounded by her loving family. Born on January 20, 1926, she was the daughter of the late Josephine Pace. She was the beloved wife to the late James DeFalco for 76 years. Loving mother to Geraldine Caravella and the late Salvatore DeFalco. Cherished sister to the late Dorothy McConnon, and sister-in-law to James' six siblings. She was a dear mother-in-law to Alfred Caravella and Margaret DeFalco. Nanny Madge was a devoted grandmother to Jimmy and Valerie, Jill and Dave, Jane and Ritchie, Lola and Steve, Jamesy, and Sal and Vicky. She was a wonderful great-grandmother to Alexandra, Andrew, Alicia, Jonathan, Kayla, James, Jack, Cassidy, Nicholas, Maddie, Dom, and Lily who all adored her. She will be missed by her many nieces and nephews. Madeline grew up in Staten Island where she met the love of her life, James DeFalco. She fell in love instantly and they got married when James was on leave during World War II. She worked at the family owned grocery store, Arrochar Market, and South Beach Amusement Park. Madeline loved to teach life lessons to her family that they will carry with them forever. Madeline loved her family more than words could describe. She enjoyed dancing, bowling, playing May I, Yahtzee, cooking for all the holiday meals. Madeline was also an avid Met's Fan, and enjoyed watching her favorite team and players on a regular basis. What was most important to her was spending time with her family, especially her grandchildren and great- grandchildren. Nanny Madge loved being the center of attention. The family will receive friends from 9:00 a.m. - 10:30 a.m. on Monday, January 10th at the John Vincent Scalia Home for Funerals, Inc., 28 Eltingville Blvd. , Staten Island, New York. A Mass of Christian Burial will be celebrated at 11:15 a.m. on Monday, January 10th at Our Lady Star of the Sea Church located at 5411 Amboy Road, Staten Island. Interment following at Resurrection Cemetery.

Madeline DeFalco, 95 of Staten Island, New York passed away in her home on January 6, 2022 surrounded by her loving family. Born on January 20, 1926, she was the daughter of the late Josephine Pace. She was the beloved wife to the late James... View Obituary & Service Information

The family of Madeline DeFalco created this Life Tributes page to make it easy to share your memories.

Madeline DeFalco, 95 of Staten Island, New York passed away in...

Send flowers to the DeFalco family.