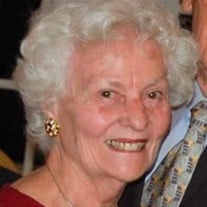 Margaret Ann (Peggy) Schroder was born on November 16, 1927 to Frank and Margaret Scoblete in Brooklyn, New York. She grew up in Bay Ridge with her four siblings, Frank, Grace, John, and Dorothy. Peggy attended P.S. 102 where her son John became the custodian some 70 years later. She graduated from Fort Hamilton High School in 1946 as a top-honors and Arista student. As a teenager, Peggy worked in the millinery department in Namm's Department Store selling ladies hats. She also worked in her father's fruit and vegetable market. Peggy always spent the $0.75 she earned there to go roller skating at the Bay Ridge Roller Rink. Living close to the 69th St. Brooklyn-Staten Island Ferry, she loved to venture to Staten Island with her friends to bicycle out to Tottenville. During the war years she helped out in many local war efforts of the day, especially for her two brothers Frank and John who were serving overseas at the time. After graduating high school, she was employed as a secretary for American Ship Brokerage in Manhattan where she enjoyed her working years until her first child was born in 1952. She was married to Kurt Schroder on October 28, 1951 in Our Lady of Angels Roman Catholic Church. Her husband Kurt was in the same graduation class at Fort Hamilton High School, but they did not start dating until he returned from the service in 1948. The happy couple bought their forever home in 1958 in Richmondtown. Margaret soon became active in St. Patrick's parish where her four children attended school. She was an early member of the St. Helena's Guild and lent her assistance to the school's many activities. She returned to the work place after her four children were grown and was employed at an insurance firm in Bay Ridge, Brooklyn until she retired in 1988. Peggy loved to travel and made trips to Ireland, Italy, Germany, Austria, and Canada. She also enjoyed taking many trips up and down the East Coast of the United States, especially to Marietta, Georgia where she was able to visit her daughter Patricia. Many summers were spent vacationing on the Great Sacandaga Lake in the Adirondack Mountains and winters at their timeshare at Woodloch Pines in the Poconos. Peggy greatly enjoyed sports. In her younger years, she bowled, cycled, played tennis and was even a charter member of the South Shore Swimming Club. She loved spending time with friends and playing cards. She was an avid New York Yankee fan and always stayed up to watch the games from start to finish. Peggy was a devout Catholic and never went a day without praying the Rosary. She was a proud and devoted wife, mother, grandmother, and friend. Peggy died peacefully on March 14, 2022 at Eger Nursing Home on Staten Island at the age of 94. She is survived by her husband Kurt of 70 years; four children and their spouses Patricia and George Sigeti, John and Rose Schroder, Kurt and Lisa Schroder, and Maureen and Mark Criscitello; five grandchildren George, Alexandra, Juliet, Gregory, and Jozie; and great granddaughter Nora Rose. A Funeral Mass will be held at 11:00 AM on Monday at St Patricks Chrch located at 53 St Patricks Place Staten Island, New York 10306. Interment will be in Moravian Cemetery, Staten Island, NY. The family will receive friends from 1:00 PM to 4:00 PM and 6:00 PM to 8:00 PM on Sunday, March 20, 2022, at John Vincent Scalia Home for Funerals, Inc., 28 Eltingville Blvd, Staten Island, New York. Online condolences may be made to the family at www.scaliahome.com

The family of Margaret Ann Schroder created this Life Tributes page to make it easy to share your memories.

Send flowers to the Schroder family.