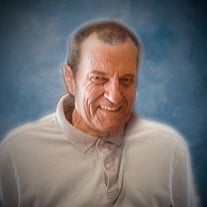 Merton "Skip" Amon, 78, a native of Staten Island, NY, passed away peacefully at his home in Port St. Lucie, FL on Thursday, January 27, 2022. A graduate of Curtis High School, Mr. Amon worked for Union Bank of Switzerland (UBS) in Weehawken, NJ for the longest span of his more than four-decade career. During his retirement, Mr. Amon enjoyed spending time with his family, and rooting for his new local sports teams in Florida. An avid sports fan, Mr. Amon rooted for the underdog and cheered for his favorite NY sports teams, particularly the Mets and the Giants. Above all, he loved to spend time with his beloved wife and his entire family, attending family events, eating, and cruising for vacations. Skip wished to be remembered as a loving husband and father, and an all-around good person. Mr. Amon is survived by Diane, his devoted wife of over 54 years, his four loving children Gail Amon, Tracy Ann Hogan and her husband David, Timothy Amon and his wife Jessica, and Corey Amon and his wife Anne, and eight adoring grandchildren, Tyler, Danny, Tianna, Sean, Kevin, Keeley, Megan, and Emily. He is also survived by his sister, Diane McDermott, two nieces and two nephews and their families, and a large extended family on his wife's side. Visitation for Mr. Amon will be held on his native Staten Island at John Vincent Scalia Home, 28 Eltingville Boulevard, 10312, on Thursday, February 3, 2022 from 7-9pm, and Friday, February 4 from 2-5pm and 7-9pm. A funeral Mass will be held at 10am on Saturday, February 5 at Holy Child RC Church, Amboy Road, where he was a long-time parishioner. Online condolences may be made to the family at www.scaliahome.com

The family of Merton Amon created this Life Tributes page to make it easy to share your memories.

Send flowers to the Amon family.