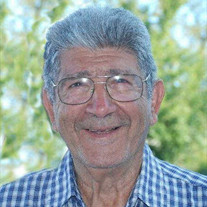 Michael K. Anastos, 84, passed away on Monday, November 8, 2021, at his home surrounded by his loving family. Michael was born January 8, 1937 in a small village in Cyprus called Akapnou. Michael met and married the love of his life, Vicky,... View Obituary & Service Information

The family of Michael K. Anastos created this Life Tributes page to make it easy to share your memories.

Send flowers to the Anastos family.