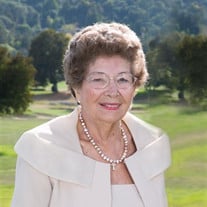 Odette Marie Assile left us to be with her husband Elias on April 27, 2021. She was 92 years young. Odette was considered the matriarch of the family - a title that she wouldn't acknowledge but greatly deserved. Born in Manila, Philippines to Khalil and Suraya, she and her brother Joe survived the Japanese invasion. After the war and armed with American passports the family made their way to the USA where Odette finished High School and married the love of her life Elias Assile. Once the Philippines declared their independence, all Filipino issued American passports were revoked. Odette, Elias and their son Eddie were forced to leave NYC and made their way to the Dominican Republic where they rebuilt lives that included a thriving shirt factory. They welcomed Vivian while living in the DR and became a happy family of four. Almost ten years later, Odettte, then pregnant with Michael, had to once again, due to political turmoil, pack up her family in search of a safer place to live. The family made their way to Brooklyn, NY where Odette would welcome her 4th and final child, Robert. Mom was an amazingly strong woman. She and her best friend and husband Elias built a business that sustained their little family and afforded them the American Dream of living free in the USA. Throughout the difficulties life presented, Odette always persevered. She always had a positive outlook and realized that a strong, loving family is truly life's greatest treasure. To that end she looked after extended family as fiercely as her own. She took care of her sickly aunt and took in her aging uncle. Our Brooklyn home had a revolving door as she welcomed relatives coming to America, regardless if she knew them or not. Our relatives from all over the world always knew that Odette and Elias would provide a soft place to land while they created their own American dream. None of these relatives ever forgot the efforts mom made to help them settle here. Mom was as proud of the cousins as she was of her own sons and daughter. She was very active in the church, joining the women's club, fund raising through bake sales and white elephant sales. She sang with the choir and was an usher. She also volunteered her time to teach reading and writing English. Throughout her life, Odette was also a true believer in the Grace of God almighty and His Son Jesus. Her strong faith led her to make countless novenas and said many rosaries asking for God's grace. Her faith was a true source of strength which she shared with all of us. She continued to pray for all of us, doled out advice and was the one who kept the entire family together. She will be greatly missed. Odette was the beloved wife to the late Elias, who passed away in 1995. She is survived by her four children and their families: Son Edward and his spouse Arlene, Granddaughter Robyn and Spouse John with great grandchildren Leyla & Zachary Granddaughter Dana and Spouse Robert with great grandchildren, Elias & Gregory. Daughter Vivian and her late spouse Maurice Grandson, the late Joseph Grandson Paul and his spouse Kalynn with great grandchildren Karson and Camden Granddaughter Judy and spouse Dice with great grandchildren, Aya and Zara. Son Michael and spouse Hala with grandchildren Christian, Andrew and Mary. Son Robert and spouse Susan with granddaughter Grace. A Mass of Christian Burial will be celebrated at 10:00 a.m. on Tuesday, May 4, 2021 at St. Clare Church located at 110 Nelson Ave Staten Island, New York 10308. Interment will follow in Calvary Cemetery, Woodside, NY. In lieu of flowers, donations to the Salesian Missions and Boys Town USA would be appreciated. www.Boystown.org

Odette Marie Assile left us to be with her husband Elias on April 27, 2021. She was 92 years young. Odette was considered the matriarch of the family - a title that she wouldn't acknowledge but greatly deserved. Born in Manila, Philippines... View Obituary & Service Information

The family of Odette M. Assile created this Life Tributes page to make it easy to share your memories.

Odette Marie Assile left us to be with her husband Elias on April...

Send flowers to the Assile family.