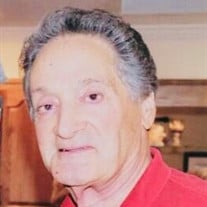 Ralph S. Molaro, 82, of Staten Island, New York, passed away on November 17, 2021, in Staten Island, while surrounded by the love of his family. Born on December 26, 1938, in New York's Little Italy, Ralph was the devoted son of Gennaro and Elvira Molaro. He was also a loving brother to the late Dominick Molaro. Ralph spent his childhood in the Coney Island neighborhood of Brooklyn, New York. Upon graduation from high school, he served in the United States Army. After working alongside his father and brother at Molaro Dress Contracting in Manhattan, Ralph pursued a career in the fashion industry. He cultivated his draping and patternmaking skills at Manhattan's Fashion Institute of Technology. A savvy businessman, Ralph founded Moroci, a couture apparel company in New York City. He outfitted many American icons and former First Ladies, including Rosalynn Carter and Jacqueline Kennedy Onassis. Ralph also worked for prominent fashion houses such as Badgley Mischka and Escada. In his leisure time, Ralph enjoyed boating and fishing. A music enthusiast, he loved listening to Frank Sinatra, Louis Armstrong, and Ella Fitzgerald, among other greats. He spent a lot of time with family and longtime friends. Loved by many, Ralph selflessly and generously gave by sharing advice or through kind gestures, which he offered in a quiet, reserved manner. Devoted to his family, Ralph was a loving husband to Grace his wife of 58 years. He was also a devoted father to his daughters, Colleen Varallo, Tricia Simon, and Regina Molaro-Fish, and his son, Jerry Molaro. Ralph was loved and admired by his sons-in-law, Freddy Varallo, Brian Simon, and Dr. Peter Fish, and his daughter-in-law, Christine Walsh Molaro. He was a cherished brother-in-law to James and Carol Gallagher. Finally, Ralph was the proud Pop-pop of Caroleena Simon, Juliana Simon, Stefano Molaro, Luca Molaro, and Daniela Molaro. The Molaro family will welcome family and friends from 2:00 to 5:00 p.m. and 7:00 to 9:00 p.m. on Sunday, November 21, 2021, at the John Vincent Scalia Home for Funerals, Inc., 28 Eltingville Blvd., Staten Island, New York. A Mass of Christian Burial will be held at 11:00 a.m. on Monday, November 22 at St. Clare's Church, 110 Nelson Avenue in Great Kills, Staten Island. 718.984.7873, stclaresi.com. In lieu of flowers, donations may be sent to St. Jude Children's Research Hospital (https://fundraising.stjude.org/site/TR;jsessionid=00000000.app20117a?px=7302231&fr_id=39300&pg=personal&NONCE_TOKEN=2EE7EFCC23B76430187CA37078E8A4ED) or Stephen Siller Tunnel to Towers Foundation (t2t.org). Online condolences may be made to the family at www.scaliahome.com

Ralph S. Molaro, 82, of Staten Island, New York, passed away on November 17, 2021, in Staten Island, while surrounded by the love of his family. Born on December 26, 1938, in New York's Little Italy, Ralph was the devoted son of Gennaro and... View Obituary & Service Information

The family of Ralph Molaro created this Life Tributes page to make it easy to share your memories.

Send flowers to the Molaro family.