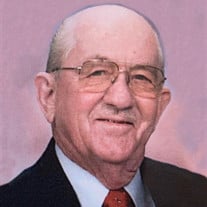 Long time Staten Islander, and recent resident of the Atlanta area, Richard Brady, passed away peacefully on April 20th at the age of 90. Richard was born in Denver, but during his early years moved with his family several times before settling in Des Moines, Iowa. He continued to travel, visiting and spending summers with relatives throughout the mid-west until he left home to join the Air Force during the Korean War. In the Air Force, he trained and served as a medic, spending the majority of his service years at the Air Force base in Gander, Newfoundland. It was here in Newfoundland that he met a local postal clerk who would become his wife. That meeting was the start of a long life together - Geraldine (Gerry) Doyle and Richard fell in love and were soon married. Once his enlistment was up, they married and began their life together in Brooklyn, where Richard began a long career as an Iron Worker with IBIW Local 40. As an iron worker, he helped to build and rebuild the New York skyline and infrastructure working on such high-profile projects as the Twin Towers and the Verrazano Bridge. The completion of that bridge opened the door to Staten Island; and Richard, Gerry, and their children were some of the ''newcomers'' to the Island. They bought a house in Eltingville - the family home for almost 50 years. Richard continued to enjoy travelling with his wife and family - seeing the country by car and camper, taking cruises with Gerry, and experiencing multiple trips to locations such as Ireland and Hawaii. The allure of the water inspired Richard to become a boat owner, and he loved to travel the waters around New York as an avid boater. This led to a significant stint for him as a member of the Coast Guard Auxiliary, where, amongst other duties, he served to train hundreds of new enthusiasts. In addition to boating, Richard had a diverse set of other hobbies. He enjoyed music, dancing, and parties; as was known to be able to pick up any of multiple instruments and play well. He was an avid Civil War enthusiast. He enjoyed playing chess at multiple levels. He enjoyed gardening and DIY projects. But most important to him, Richard was also a man of great faith. He and his family were amongst the original members of the Holy Child parish. He served as Usher and as a Eucharistic Minister for many years, and lived his life as a committed and active Catholic. Richard was preceded in death by his parents Francis and Nellie (nee Love), his wife Gerry, and his daughter Gwen. He leaves behind his son Paul and wife Claudia, daughter Jeannene Lenahan and husband Jim, five grandchildren, and two great-grandchildren. He will be remembered as a loving, generous, selfless man who had a great sense of humor and an insatiable curiosity and thirst for knowledge. The family will receive friends from 1:00 - 5:00 p.m. on Sunday, May 2, 2021, at the John Vincent Scalia Home for Funerals, Inc., 28 Eltingville Blvd, Staten Island, New York. A Mass of Christian Burial will be celebrated at 11:00 a.m. on Monday at Holy Child Church located at 4747 Amboy Rd Staten Island, New York 10312. Richard will be interred alongside his wife, Gerry, in Woodbridge Memorial Gardens, Woodbridge, NJ. Please be mindful due to the current State mandate that a mask must be worn at all times in the funeral home and social distancing requirements must be followed during the services. Due to the current Pandemic a strict 50 person in room policy is in effect, as well as a maximum of 200 people permitted in Church. Please adhere to this policy and allow others to pay their respects as well. Due to the current pandemic circumstances please note: We do not accept deliveries from outside vendors for bakery products, fruit baskets, and floral arrangements until further notice. Floral Arrangements can be purchased from our in house floral designers who work under the most stringent sanitary conditions which include temperature checks, mask wearing, distancing and protective clothing. You can call 718-948-2016 and place your order. We must protect the families we serve, our own families and staff who operate the funeral home.

Long time Staten Islander, and recent resident of the Atlanta area, Richard Brady, passed away peacefully on April 20th at the age of 90. Richard was born in Denver, but during his early years moved with his family several times before settling... View Obituary & Service Information

The family of Richard E. Brady created this Life Tributes page to make it easy to share your memories.

Long time Staten Islander, and recent resident of the Atlanta...

Send flowers to the Brady family.