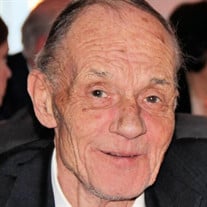 Richard W. Keane, 80 of Great Kills passed peacefully at home on Wednesday, June 9, 2021. Born Friday, November 22, 1940 in New York, New York, he was the son of the late James Keane and the late Leigh Hunt Keane. Richard, a retired store manager for the former Acme and Pathmark Stores, he spent his free time doing the things he loved. A Master carpenter, Richard could build anything. An artist with his hands Richard excelled in his woodworking skills. Richard loved fishing, and cherished his time at the track, sharpening his skills at picking the winning horses, always with the race schedule in his back pocket and a pen in his flannel shirt pocket. His grandchildren will remember him fondly as a Chinese food connoisseur. Richard cherished most, time spent with family and friends. Richard was a long time member of the Staten Island Yacht Club as well as a member of the Elks Lodge. He was the beloved husband of Diane Keane. Loving father of Ricky Keane and Deborah DiCaprio. Dear father in law of John DiCaprio. Cherished grandfather of John, Christopher, Brianna, and Amanda, and great grandfather of Luca. Dear brother of Donald Keane, and Marie Urbanski. A Mass of Christian Burial will be offered at 9:00 AM on Saturday at St. Patrick's Church located at 53 St. Patrick's Place Staten Island, New York 10306. Interment will follow in Resurrection Cemetery, Staten Island, NY. The family will receive friends from 4:00 PM to 8:00 PM on Friday, June 11, 2021, at John Vincent Scalia Home for Funerals, Inc., 28 Eltingville Blvd, Staten Island, New York.

The family of Richard W. Keane created this Life Tributes page to make it easy to share your memories.

Send flowers to the Keane family.