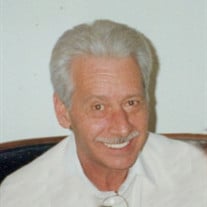 Richard Spinosa, Sr. of Galloway, New Jersey passed away on Saturday, October 10, 2020 at Eger Nursing Home after a brief illness. He was the beloved husband to his late wife Marie. They were married for 56 years before her passing in 2016. Richard and Marie began their lives together in Brooklyn and then settled in Staten Island. They lived in Great Kills and Tottenville. Together, they raised their sons Patrick, James, Richard Jr., and Michael. Richard was a veteran who proudly served his country as a member of the US Army. He was based out of Fort Dix Army Base in Fort Dix, NJ. He was also a member of the Army Reserves. He began his career as a Police Officer for the NYPD. He worked his way up in the Police Department to the rank of Detective. He was a member of the Career Criminals Investigation Unit, based out of 1 Police Plaza. He enjoyed his work on the force and the time he spent as a detective in his unit. He retired from the NYPD 1983. Richard was a baseball enthusiast. His favorite team was the New York Mets. He enjoyed taking trips to Atlantic City. He enjoyed a good game of Poker and most recently playing Joker Poker. Above all, he enjoyed the time he spent with his family; his grandchildren especially, he was their biggest fan and the highlight of his life. He is survived by his children Patrick, James, Richard Jr., and Michael, their spouses Kim, Lisa, Renee and Bill, his sister Alice Critelli and eight grandchildren Erica, Alyssa,Stephanie, Christi, Marissa, Richard III, Maximillian and Vincent, and his four great grandchildren Alexander, Gabriella, Leonardo and Luciana. Richard was predeceased by his wife Marie and brother Robert. A Mass of Christian Burial will be at 9:45 AM on Tuesday at Holy Child Church located at 4747 Amboy Road Staten Island, New York 10312. Arrangements include Private Cremation and then he will be laid to rest in Ocean View Cemetery with his wife Marie. The family will receive friends from 5:00 PM to 9:00 PM on Monday, at the John Vincent Scalia Home For Funerals Inc. 28 Eltingville Blvd, Staten Island NY 10312. Please be mindful due to the current State mandate that a mask must be worn at all times in the funeral home and social distancing requirements must be followed during the services. Due to the current Pandemic a strict 40-50 person in room policy is in effect, please adhere to this policy and allow others to pay their respects as well. Online condolences may be made to the family at www.ScaliaHome.com

Richard Spinosa, Sr. of Galloway, New Jersey passed away on Saturday, October 10, 2020 at Eger Nursing Home after a brief illness. He was the beloved husband to his late wife Marie. They were married for 56 years before her passing in 2016.... View Obituary & Service Information

The family of Richard Spinosa created this Life Tributes page to make it easy to share your memories.

Send flowers to the Spinosa family.