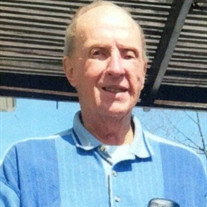 Richard Wolber, 88, of Eltingville, passed away on Sunday, May 15, 2022, surrounded by his loving family. Born February 11, 1934, in Brooklyn, NY to the late John Wolber and Christina Sutherland Wolber. Richard married Jean Seubert in 1959 and lived in the Bay Ridge area of Brooklyn. He attended night school at Polytechnical Institute in Brooklyn for 10 years and graduated as a Professional Mechanical Engineer. In 1975 he proudly purchased and moved to his new home in the Eltingville area of Staten Island. Richard worked as a Professional Mechanical Engineer for the City of New York in the Mayor's Office in the Bureau of the Budget and Management. He was involved in the building plans of numerous projects throughout New York City, including the World Trade Center. He then went on to work for the Department of Environmental Protection Agency Division of Water Treatment. In 1990, Richard finally retired. He was a great carpenter and builder, designing and building all of the woodwork in his home, including his prized deck. Richard loved old classic movies on TCM, especially Who Done It's. He was also a Sherlock Holmes afficionado. Richard was an avid Yankees fan. He was a daily numbers player, loved crosswords and enjoyed his beers on occasion. He adored his family pets, especially Rusty, his best buddy. Richard was predeceased by wife Jean of 54 years. Loving father to Richard and Karen. Cherished brother to John. In lieu of flowers the family is asking that donations in Richard's name be made to either the American Cancer Society at https://donate3.cancer.org/, or to the Alzheimer's Foundation at https://alzfdn.org/support-us/donate/. The family will receive friends from 2:00 to 4:00 p.m. and 7:00 to 9:00 p.m. on Thursday, May 19, 2022, at John Vincent Scalia Home for Funerals, Inc., 28 Eltingville Blvd, Staten Island, New York. A Funeral service will be held at 8:00 PM on Thursday, May 19, 2022, at John Vincent Scalia Home for Funerals, Inc. located at 28 Eltingville Blvd Staten Island, New York 10312.

The family of Richard Wolber created this Life Tributes page to make it easy to share your memories.

Richard Wolber, 88, of Eltingville, passed away on Sunday, May...

Send flowers to the Wolber family.