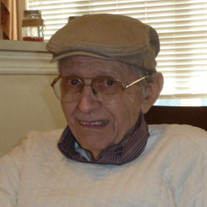 On Tuesday, April 6, 2021, Robert Justus McCoy, loving husband, father, Korean war veteran, outdoorsman and all around standup good guy passed away at the age of 92 on Staten Island, NY. Robert was born on March 5, 1929, in Brooklyn NY to Anna... View Obituary & Service Information

The family of Robert Justus McCoy created this Life Tributes page to make it easy to share your memories.

Send flowers to the McCoy family.