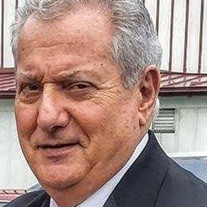 Robert Mutone, 86 of Monroe Township, New Jersey passed away on Thursday, March 18, 2021, at Monmouth Medical Center. Born Thursday, May 3, 1934 in Brooklyn, New York, he was the son of the late Salvatore Mutone and Louise Napolitano Mutone. Robert lived in Brooklyn until 1969, when he moved to the Great Kills area of Staten Island, where he lived until 2015. He moved to Monroe Township where he lived until his passing. Robert was a firefighter with the FDNY, and was later a fire marshall. In 1992, Robert became a United States Marshall at a Federal Courthouse where he worked until his retirement 2005. He also proudly served in the Navy and the Coast Guard Reserves. Robert was a great cook, particularly Italian food. He was known for his delicious meatballs. He was an avid reader and particularly enjoyed reading about history. Robert also enjoyed spending time gardening and listening to big band music. Robert was the devoted husband of 66 years to Joan Mutone. Cherished father to Loisann Stapleton (Roy), Karen St. George (the late Anthony), Phyllis Watson (Gerard), Barbara Pinto (James), and Robert Mutone (Clare). Dear grandfather 15 grandchildren and 11 great grandchildren. A Funeral service will be at 12:30 PM on Monday at St Clare Church located at 110 Nelson Ave Staten Island, New York 10308. Interment will be in Resurrection Cemetery, Staten Island, NY. The family will receive friends from 5:00 PM to 9:00 PM on Sunday, March 21, 2021, at John Vincent Scalia Home for Funerals, Inc., 28 Eltingville Blvd, Staten Island, New York. In lieu of flowers the family kindly asks that donations be made in Roberts name to Tunnels To Towers (https://tunnel2towers.org/) or Dollars for Scholars. Those interested in donating can do so online at www.statenislandachieve.dollarsforscholars.org Or via check by mailing it to: Staten Island ACHIEVE Dollars for Scholars PO Box 20357 Cherokee Station New York, NY 10021

Robert Mutone, 86 of Monroe Township, New Jersey passed away on Thursday, March 18, 2021, at Monmouth Medical Center. Born Thursday, May 3, 1934 in Brooklyn, New York, he was the son of the late Salvatore Mutone and Louise Napolitano Mutone.... View Obituary & Service Information

The family of Robert Mutone created this Life Tributes page to make it easy to share your memories.

Send flowers to the Mutone family.