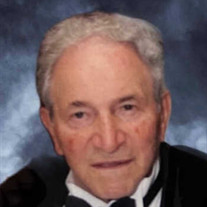 Salvatore Yannone, 97 formerly of Westerleigh, passed away on Thursday, December 30, 2021, at Golden Gate Health Care Center. Born Tuesday, February 12, 1924 in Hoboken, New Jersey, he was the son of the late Carmine and Rosaria Yannone. He was the beloved husband of his late wife Madeline Yannone. Salvatore and his late wife Madeline met in Bayonne roller skating, they wed in 1953 and were married for sixty three years before her passing. Together they raised a beautiful daughter while living in Staten Island. Salvatore worked for the New York City Board of Education. After his retirement, he worked for his family at the Nature's Garden Center located on Forest Avenue. Sal had a green thumb and loved to garden. He was well known in his family for his large and bountiful fig trees that he grew and tenderly cared for. He enjoyed traveling, taking cruises, and going food shopping with his coupons. Sal was actively involved in several senior groups on Staten Island. He also loved the holidays. Salvatore took great pride in preparing large feasts, especially carving his fresh roasted turkey on Thanksgiving and, on Christmas, he could always be found helping his wife baking in the kitchen. Their holiday cookies were very popular with their loved ones. Above all else, he was a family man. He always put his daughter and grandchildren first. He was always there to provide a ride somewhere, cheer them on in sporting and school events and whatever they were celebrating in their lives. He taught his family how important music is in one's life, especially his beloved Frank Sinatra, whom Sal knew as a kid growing up in Hoboken. Salvatore is survived by his loving daughter Rosanne Guglielmino and her late husband Vincent, his sister in law and brother in law Martha and John DePierro his cherished grandchildren Philip (Kathleen), Salvatore (Robert) and Christine (Louis) Paturzo. and his adoring six great grandchildren Alyssa, Alyssa, Louis, Vincenza, Vincent and Giavanna along with many dear nieces and nephews. A Mass of Christian Burial will take place at 9:30 on Wednesday at St. Thomas the Apostle Church located at 6135 Amboy Road. Entombment will follow in Resurrection Cemetery. The family will receive friends from 2:00 PM to 4:00 PM and 7:00 PM to 9:00 PM on Tuesday, January 4, 2022, at John Vincent Scalia Home for Funerals, Inc., 28 Eltingville Blvd, Staten Island, New York.

Salvatore Yannone, 97 formerly of Westerleigh, passed away on Thursday, December 30, 2021, at Golden Gate Health Care Center. Born Tuesday, February 12, 1924 in Hoboken, New Jersey, he was the son of the late Carmine and Rosaria Yannone. He... View Obituary & Service Information

The family of Salvatore Yannone created this Life Tributes page to make it easy to share your memories.

Salvatore Yannone, 97 formerly of Westerleigh, passed away on...

Send flowers to the Yannone family.