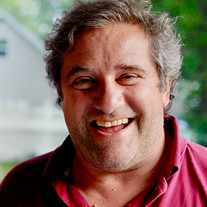 Stephen Tolve, 68 of Staten Island, New York passed away, Thursday, March 18, 2021, at Staten Island University Hospital North. Born Tuesday, September 16, 1952 in Brooklyn, New York, he is the son of Vincent Tolve and the late Julia Marotta. Stephen attended both St. Catherine of Alexandria and John Jay High School in Brooklyn, NY. He then graduated from the RCA Institute with a degree in Audio Engineering. In 1992 Stephen moved from Brooklyn to Staten Island and built a life for himself and his family. After touring Europe with the John Wite Group for several years, Stephen worked for Andrews Audio before co-founding Audio Incorporated in 1994. Over the years he worked his magic as Audio Designer/Engineer for Lincoln Center, Carnegie Hall, Saratoga Jazz Festival, Newport Jazz and Folk Festival, The U.S. Tennis Open, The Brooklyn Museum, The Town Hall, Bryant Park and literally thousands of others. In the 27 years as President of Audio Incorporated, he elevated the company to being one of the premier Audio companies in the Tri-State region. His work ethic, professionalism and design expertise was renowned in the industry and will be sorely missed. Stephen was an avid movie buff especially for the Marvel movies. He and his brother, Tom, would go to the movies often and make a day of it. He loved all things Disney, Star Trek, grilling a mean spare rib and puttering around the garden taking trees down and moving bushes for Cat. One of his favorite garden chores was the enormous wisteria vine like it was a bonzai tree. The annual Tolve Joy BBQ was a major event in the household and Stephen would go all out on the production end of it with the food, lighting and live music. That event and many others would lead to wonderful stories (with random facts that lead to other stories.....) around the kitchen table with many glasses of wine and scotch where his sense of humor would really shine. Stephen was the devoted husband of Cat Joy, who has been married to Stephen for over 30 years. They still don't remember their anniversary. Loving father of Gemanique Viall (Andy), Edward Tolve and Carson Tolve. Proud grandfather to Corey Patrick Viall and Everly Cecilia Viall. Cherished brother to Thomas Tolve and Fr. Paul Tolve and his late older brother Ernest Tolve who predeceased him in 2011. Stephen is survived by sister- in-laws Francis Tolve and Joanne Tolve. Dear Uncle to his nieces Kim Tolve and Nicole MacDonald, and nephews Vincent Tolve, Anthony Tolve and Thomas Tolve. A Funeral mass will be at 4:00 pM on Sunday at John Vincent Scalia Home for Funerals, Inc. located at 28 Eltingville Blvd Staten Island, New York 10312. The family will receive friends from 1:00 PM to 5:00 PM on Sunday, March 21, 2021, at John Vincent Scalia Home for Funerals, Inc., 28 Eltingville Blvd, Staten Island, New York. In lieu of flowers, we ask that you make a charitable donation to the American Heart Association. https://www2.heart.org/site/SPageNavigator/donatenow_heart.html Please be mindful due to the current State mandate that a mask must be worn at all times in the funeral home and social distancing requirements must be followed during the services. Due to the current Pandemic a strict 50 person in room policy is in effect. Please adhere to this policy and allow others to pay their respects as well. Due to the current pandemic circumstances please note: We do not accept deliveries from outside vendors for bakery products, fruit baskets, and floral arrangements until further notice. Floral Arrangements can be purchased from our in house floral designers who work under the most stringent sanitary conditions which include temperature checks, mask wearing, distancing and protective clothing. You can call 718-948-2016 and place your order. We must protect the families we serve, our own families and staff who operate the funeral home.

The family of Stephen Tolve created this Life Tributes page to make it easy to share your memories.

Send flowers to the Tolve family.