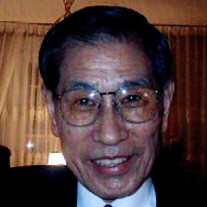 Takashi Tanaka, 88, of Randall Manor, passed away peacefully on Saturday, January 22, 2022, on Staten Island, New York. Born January 25, 1933 in Yokohama, Japan, he was the son of the late Akira and Natsue Tanaka. He was the most loved and cherished husband of Dawn Mustaki Tanaka. Tak and Dawn met in 1974 and dated until they eventually married on March 20, 1976. For the past 46 years, Tak and Dawn's love story has been one for the ages. Their beloved dog, Coco-Channel, will miss him immensely. Tak was a man who set goals and did everything he could in order to reach them. He obtained his Bachelor's degree in economics in Japan. He was very proud to become an American citizen. While in Japan, Tak worked for American President Lines. They offered him an opportunity to transfer to New York, which he happily accepted in 1967. He retired as an account executive for Oriental Overseas Container Lines in 1998. Tak was an avid gardener. He also enjoyed making origami crane mobiles. He loved to read, travel, and he enjoyed his beer and scotch. Tak collected baseball hats and shot glasses. He was a terrific chef and loved to entertain and spend time with family and friends. Among those mourning the immense loss of Tak from their lives are his sister, Setsuko Masaki of Japan, sister-in-law Mitsue Tanaka of Japan, nieces and nephews, Ayako Masaki, Yumiko Tanaka, Hideki Tanaka, Pamela Cary, Christopher Cary, Craig Cary, George Croton, Harry Croton, and Grace Gibbs, along with many other relatives and friends A gathering of family and friends will take place from 10:00 a.m. to 11:00 a.m. on Wednesday, January 26, 2022, at John Vincent Scalia Home for Funerals, Inc., 28 Eltingville Blvd,Staten Island, New York. Interment to follow will be in Moravian Cemetery, Staten Island, New York. In lieu of flowers, Donations in his memorymay be made to The North Shore Animal League.

Takashi Tanaka, 88, of Randall Manor, passed away peacefully on Saturday, January 22, 2022, on Staten Island, New York. Born January 25, 1933 in Yokohama, Japan, he was the son of the late Akira and Natsue Tanaka. He was the most loved and... View Obituary & Service Information

The family of Takashi Tanaka created this Life Tributes page to make it easy to share your memories.

Send flowers to the Tanaka family.