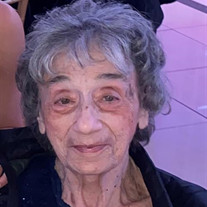 Theresa Botticello passed away in her sleep at the age of 95 on Saturday, March 12, 2022. She was born on February 21, 1927 in Brooklyn, New York, where she lived until 2017. She then moved to Staten Island to live with her sister, Helen, until they both relocated to Wappingers Falls, New York in May of 2018. Terry enjoyed spending time with her friends and playing Bingo every week. In her spare time, she loved to read and do crossword puzzles, jigsaw puzzles, and watch T.V. She could play along with the game shows with the best of them. If the family had a question about events in the past, it was Terry they turned to. She could remember anything no matter how many decades ago it occurred. She was kind and compassionate to everyone she met. Terry spent much of her career working for Emerson TV assembling the components of the old tube televisions. She later worked in a brokerage firm in Manhattan as an office assistant. Terry was the daughter of the late Francesco Botticello and Carmela Calzaretta Botticello. She is pre-decesased by her sister, AnnaRose (Annie) ; sister Maria Bruno and her late husband, Bill; brother, David and his late wife, Carol; brother-in-law Santo (Chick) Novia, and niece Susan Botticello. She is survived by her loving sister, Elisa (Helen) Novia and brother Daniel Botticello and his wife, Judy. She was a loving aunt to her many nieces and nephews, Donna and Bill Reed, Debbie Stalter, Gary Botticello, DebraJean Botticello, Annette Botticello, David and Isa Botticello, Diane and Fred Morina, Robert and Jan Novia, Steven Novia, Andrew and Amy Botticello as well has her great-nieces and nephews, Billy and Erin Reed , Joe and Kat Reed, Liz and Chris Veilleux, Matthew and Rosanna Novia, Laura and Sean Carter, Eric Morina, Stephanie and Kyle Ioos, Steven Novia Jr., Nick Novia, Casey Botticello, Madeline Botticello, Anthony and Lexi Kateridge, Craig Wildfeuer, Michael Gavin, Freddy, John Hance, and Freddy Hance. Terry was also blessed with many great-great nieces and nephews. A Funeral service will be at 11:30 AM on Tuesday at John Vincent Scalia Home for Funerals, Inc. located at 28 Eltingville Blvd Staten Island, New York 10312. Interment will be in Ocean View Cemetery, Staten Island, NY. The family will receive friends from 10:00 AM to 11:30 AM on Tuesday, March 15, 2022, at John Vincent Scalia Home for Funerals, Inc., 28 Eltingville Blvd, Staten Island, New York. In lieu of flowers, please consider making a donation to your favorite charity in memory of Theresa. Online condolences may be made to the family at www.scaliahome.com

Theresa Botticello passed away in her sleep at the age of 95 on Saturday, March 12, 2022. She was born on February 21, 1927 in Brooklyn, New York, where she lived until 2017. She then moved to Staten Island to live with her sister, Helen, until... View Obituary & Service Information

The family of Theresa Botticello created this Life Tributes page to make it easy to share your memories.

Theresa Botticello passed away in her sleep at the age of 95...

Send flowers to the Botticello family.